There’s a lot to take into consideration when you’re looking for the best MNR-W vs SOB-W dream11 team. Today, We are going to discuss MNR-W vs SOB-W 19th Match news, MNR-W vs SOB-W fantasy Cricket prediction, and dream11 Expert data. This League is called The Hundred Women 2021 in the dream11 app.

Manchester Originals Women vs Southern Brave Women, The 19th match will be played in Old Trafford on 5 August 2021 at 8:00 PM.

Manchester Originals Women is at number 8 in points table after loosing all games they have played while Southern Brave Women has played 4 games and won all 4 games.

L Lee will open inning for MNR. She is very attacking player and can score big in few balls but lack consistency. She Has scored 57 run last 3 game.

Try C Rudd only in gl teams as she bat 6 down so will provide only keeping points.

M Du Preez will bat in middle order. She is good player and very experienced South Africa player and is capable of scoring big score. She has scored 38 runs in last 3 games.

G Boyce bat in top order and is good player. She has scored 37 runs in last 3 games.

S Mandhana is very attacking opener and can be lethal on her day. She failed 1st game but is class player. She has scored 69 runs in last 4 game.

S Dunkley has been very consistent in domestic circuit and got his England call against India and has not looked back. She has scored 85 run last 4 game.D Wyatt will open inning and his recent form is great and if needed can also few balls. She has scored 119 run in last 4 game

H Kaur is must have player for any team as she will provide points through both department if she bowl. She scored 94 runs in last 3 game.

E Lamb will bat in top order and is very good player will provide points through both department. She has scored 8 run and picked up 3 wicket in last 3 game but she is top allrounder in world.

S Taylor is must have player provide points through both department and is top allrounder in world. She has scored 34 run in last 2 t20. She has scored 113 run and picked 2 wicket last 4 game.

A Wellington will bat 4 down is a very good allrounder from the side capable to score big also has ability of picking wickets.

A Shrubsole is the good bowler for SOB and picked 5 wicket in recent t20 and also very capable of batsman. She has score 40 run last 4 game picked 6 wicket.

K Cross will lead the bowling attack for her side and also lead side. L Bell and L Jackson will assist them and all has been in good form. K cross has picked 3 wickets in last 3 games.

S Ecclestrone at present is number 1 spinner in world and has picked 3 wickets in last 3games. 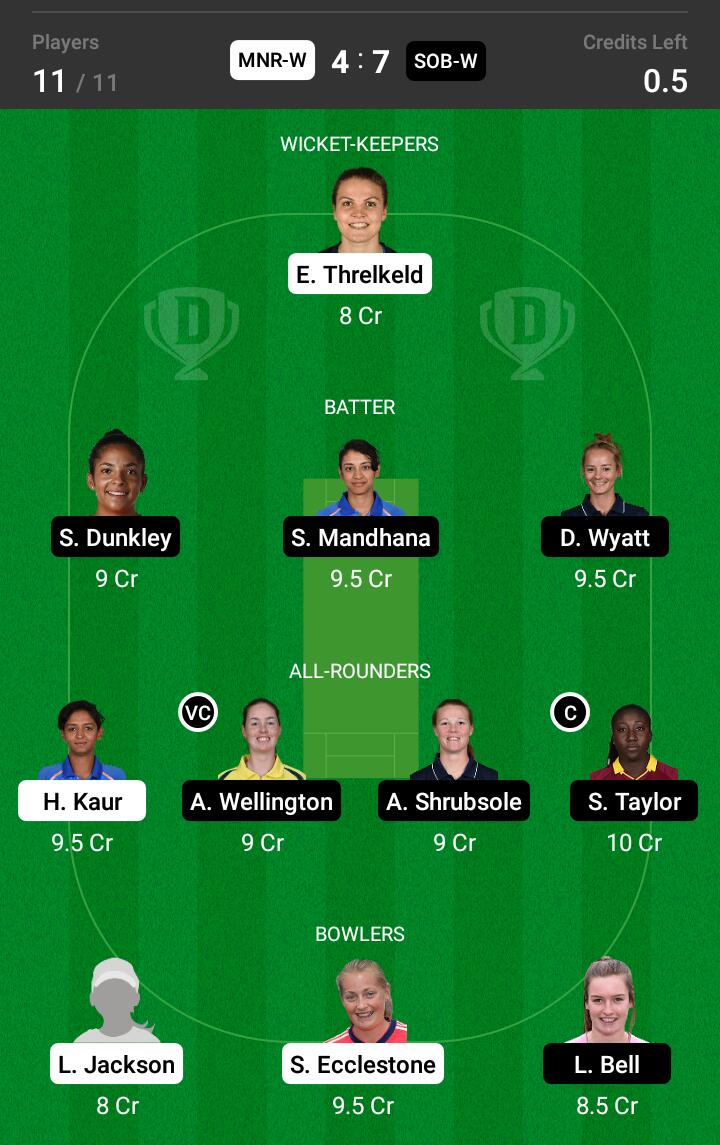