There’s a lot to take into consideration when you’re looking for the best MID vs KET dream11 team. Today, We are going to discuss MID vs KET 111th Match news, MID vs KET fantasy Cricket prediction, and dream11 Expert data. This League is called English T20 Blast 2021 in the dream11 app.

Middlesex won last game against GLA by 7 wickets they are good side but there bowling looks weak. They have lost 8 games they have played and won only 3.

Kent is a very strong side has played 12 games and won 8 while losing 3 of them.

J Simpson will be punt player today also keeps and also bat well. He open in some games but here he is batting 3 down. Simpson has scored 116 runs in last 10 games. He played his debut series against PAK and will be high in confidence.

J Cox is wicket-keeper batsman average record he is batting 4 down and not keeping but has been in good form with bat. He has scored 300 runs in last 11 games.

O Robbinson will bat 1 down and keep for them. He has scored 103 runs in last 4 games.

S Eskinzai, J Cracknell open innings for MID, Both are must have player as, S Eskanzai good player also was 3rd highest run score for his domestic side last season and has already scored hundred this season. He has scored 399 runs in 1st 11 game.

P Striling will open inning and has been very consistent player in last 1-2 year can also bowl off spin if needed. He has scored 148 runs in 1st 5 game. He has return back to Ireland.

E Morgan will be available for 1st few matches and will bat 1 down. He is very crucial but his recent form not great. Morgan has scored 62 runs in last 3 games. He will not play this game.

J Cracknell if plays is very good player, play very attacking cricket, has been in good rhythm last series. He has scored 258 runs in last 10 games.

D Bell is very consistent opening batsman also provide points through bowling but has not bowl yet. He also lead side. He has scored 341 runs in last 11 games.

A Blake is very consistent player for Kent he bats 2 down and do anchor role but this season he has been in very bad form. He has scored 20 runs in last 5 games. He was dropped last game.

J Lennings is very dangerous player can change game in 10 bowls but bat low so try in only gl teams. He has scored 287 runs in last 11 games. He also bowl some games and has ability to pick wickets.

Z Crawley was last year highest run getter for Kent in t20 blast. He was England test side but now will play and will be crucial. He has scored 257 runs in last 6 games.

L Hollman is bowling allrounder and has ability to pick wickets. He has picked up 8 wicket in 1st 11 games.

D Mitchel since arrival has been brilliant. He has scored 164 runs in 6 games also picked 8 wickets.

C Green is very good off spinner fro AUS who also very handy batsman lower down. He has played all around world in various t20 leagues. Green has taken 11 wicket in last 7 game. He has not played last few games.

J Denly will open inning and bowl some part time spin in powerplay. He has scored 199 runs in last 11 games and picked up 6 wickets.

D Stevens very experienced player but fit at this age also. He bats 4 down and bowl 4 over. He has taken 10 wickets in last 11 games.

G Stewart is bowling allrounder who bats 6 down and bowl 4 over. He has taken 8 wickets in last 8 games. He missed last game.

N Sowter will be leading their spin bowling. Sowter has good club record has taken 13 wickets in last 9 game. He is also very good lower order batsman.
Mujeeb has joined MID and has picked 6 wickets in last 4 games. 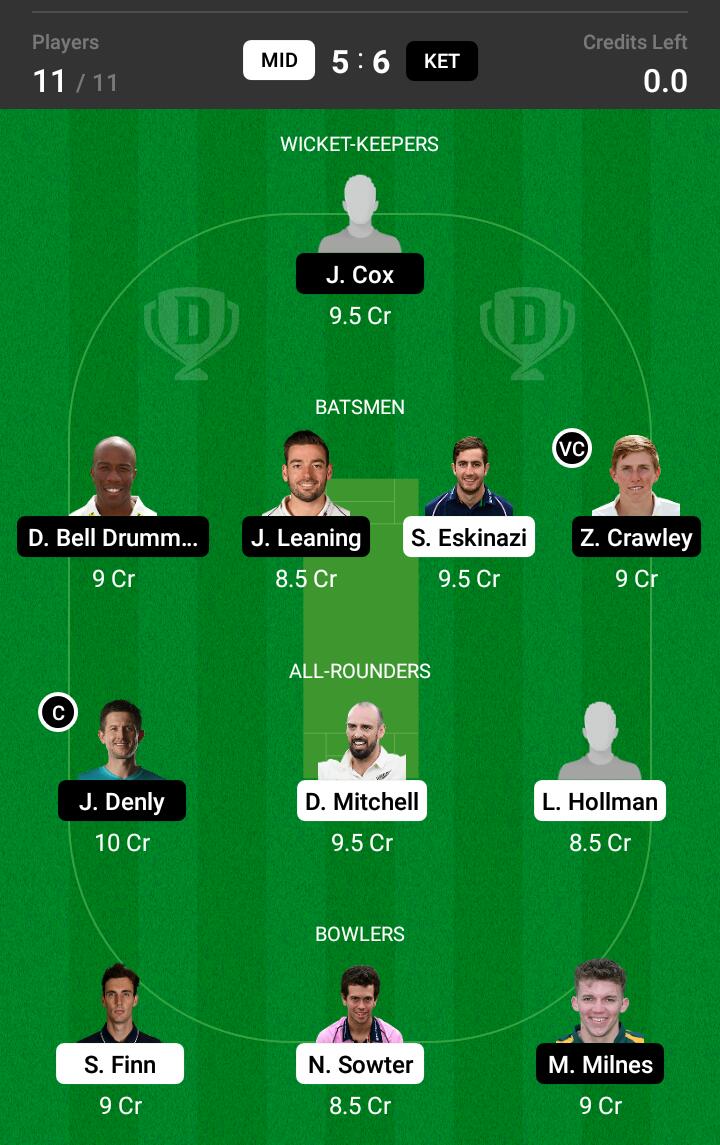