There’s a lot to take into consideration when you’re looking for the best MI vs CSK dream11 team. Today, We are going to discuss MI vs CSK 27th Match news, MI vs CSK fantasy Cricket prediction, and dream11 Expert data. This League is called Indian Premier League 2021 in the dream11 app.

Mumbai Indians vs Chennai Super Kings, The 27th match will be played in Arun Jaitley Stadium, Delhi on 1 May 2021 at 7:30 PM.

Mumbai Indians is a very strong side and are contender to win trophy and make hat-trick of trophies they are that great side. They lost 1st game against RCB, they have never won 1st game in IPL history. Won 2nd game from the point when games was gone from there hands but then lost 2 games and there batting failing this year. They won last game by 8 wicket and will look to kep winning momentum.

Chennai Super Kings has on there last five games single handly after loosing 1st game very badly. CSK are at number 1 and looking most strong side.

Ishan Kishan has been in rock solid form scored 56 on his debut for India in t20. He scored 28 in 1st game look compact but got out early in all game. He was dropped last game but if play try him in gl teams.

De Cock came back after quarantine so looked rusty will look to play big this game also as he got good half century last game. He will also keep.

Suryakumar Yadav is very consistent. He is also technically very solid. S Yadav will look for very good season so that he can cement his place in National side for t20 worldcup. He is getting start every game but missing golden oppurtunity to score big.

Rohit Sharma has a T20 average of 32.17. If the game is set means, We can expect a century from him. He got runout 1st game was looking in good touch and also missed to score big in 2nd and 3rd game after getting start. He looked in prime touch in all games.

Faf Du Plesis is very consistent, He is technically very strong, we can surely expect 45+ dream11 points from him. He got out early 1st game but scored 30+ every game after that. In 2nd last game he missed 100.

For Suresh Raina and Ambati Raydu this IPL is very cruicial as both has not much played cricket in past year, so there form will be crucial for CSK side if they want to go furthur. S Raina Mr IPL looked in prime touch 1st game.

R Gaikwad has been find for CSK. He is scoring every game has been in prime touch.

Hardik Pandya will act as the MI pillar. He is expected to bowl in this game or next game. He has been very bad with the bat this season.

Kieron Pollard will get less chance to bat. So, we can skip him, also rare chance of bowl.
Krunal Pandya will finish inning for MI, can also be sent as a pintch hitter, He is expected to bowl much now as matches in Delhi where spinner play major part. He batted 2 down last game and look compact.

M Ali has been cruicial for CSK bowling 2-3 overs in middle and batting 1 down. He has been best player for them.

Mostly, Ravindra Jadeja and Sam Curran will take at least one or two wickets, Sam Curran can also be promoted to hit from the go. R Jadeja scored 37 in last over against H Patel

Rahul Chahar has been best spinner for MI in Mumbai grounds which mostly doesn’t favour spinner, so he will love these grounds. Must have in your team. He got 4wicket 2nd last game and getting wicket every game.

D Chahar, DJ Bravo will contain runs. So, you can pick them according to the dream11 credit.

Deepak Chahar will play a major role in top overs. He took 4 wicket in two games. 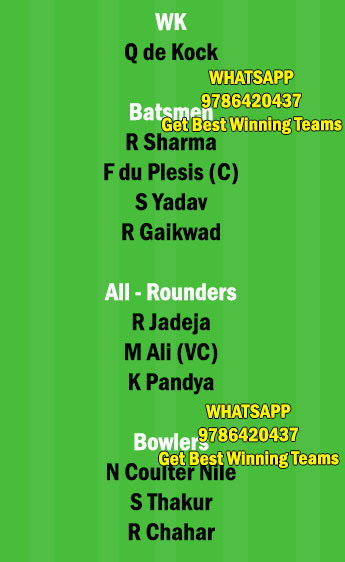