There’s a lot to take into consideration when you’re looking for the best LOR vs MSC dream11 team. Today, We are going to discuss LOR vs MSC 27th Match news, LOR vs MSC fantasy Cricket prediction, and dream11 Expert data. This League is called Dhaka T20 2021 in the dream11 app.

Legends Of Rupganj vs Mohammedan Sporting Club, The 27th match will be played in Bangladesh Krira Shikkha Protisthan No 3 Ground, Savar on 10 June 2021 at 1:00 PM.

Legends Of Rupganj is a very weak side. They lost last game against KSKS by 7 wickets. They have played 2 games loosing both.

Mohammedan Sporting Club is a very good side. They lost last game against PDSC by 22 runs. They have played 3 game won 2 lost 1.

I Sukkur will bat 3 down for MSC. He is consistant with bat. Sukkur is talented player capable of scoring big but batting very low. HE has scored 63 runs in last 3 games.

Try J Ali in gl teams only he has not been in good form. He has scored just 32 runs in 2 games.

Shabbir Rahman will bat 2-3 down for LOR. He has more than 50+ average in domestic circuit. He scored 46 runs in last 2 game.

M Al Amin Jnr will bat 2 down and has been in good form so he is also good vc choice. He is very good hitter of bowl. He has scored 55 run 1st two game.

S Islam open inning and and has been in good form in domestic circuit. He has scored just 15 runs in 2 games.

M Pervez Hossain will open inning and is very consistant batsman. He has scored 67 runs in 3 games.

S Rahman will bat 1 down and has scored 52 runs in 3 game and is technically solid player.

Shakib Al Hasan will bat 1 down and bowl 4 overs . He is very handy batsman and good bowler. He has scored 42 run and picked 3 wicket in last 3 game.

S Hom will bowl 2-3 over of spin and will also finish inning for his side.

M Hasan who is capable batsman. He has scored 61 runs in 3 games and is proper batsman.

N Islam is very good off break bowler and also bat 1 down and has scored 38 runs in 2 games.

T Ahmad and A Jayed are must have from MSC, will bowl 3-4 overs in start and death can pick 1-2 wickets. A Haider and R Miah will support them. T Ahmad has picked 5 wickets in 3 games.

Try S Islam in your teams. He will be LAO bowler for side. He has experience of International games.

M Shahid is must have from LOR will bowl 2 overs in death and 2 at start can pick 1-2 wickets. He has picked 2 wickets in 2 games.

Rotate N Samad and R Miah in your teams as anybody can pick 2 wickets. 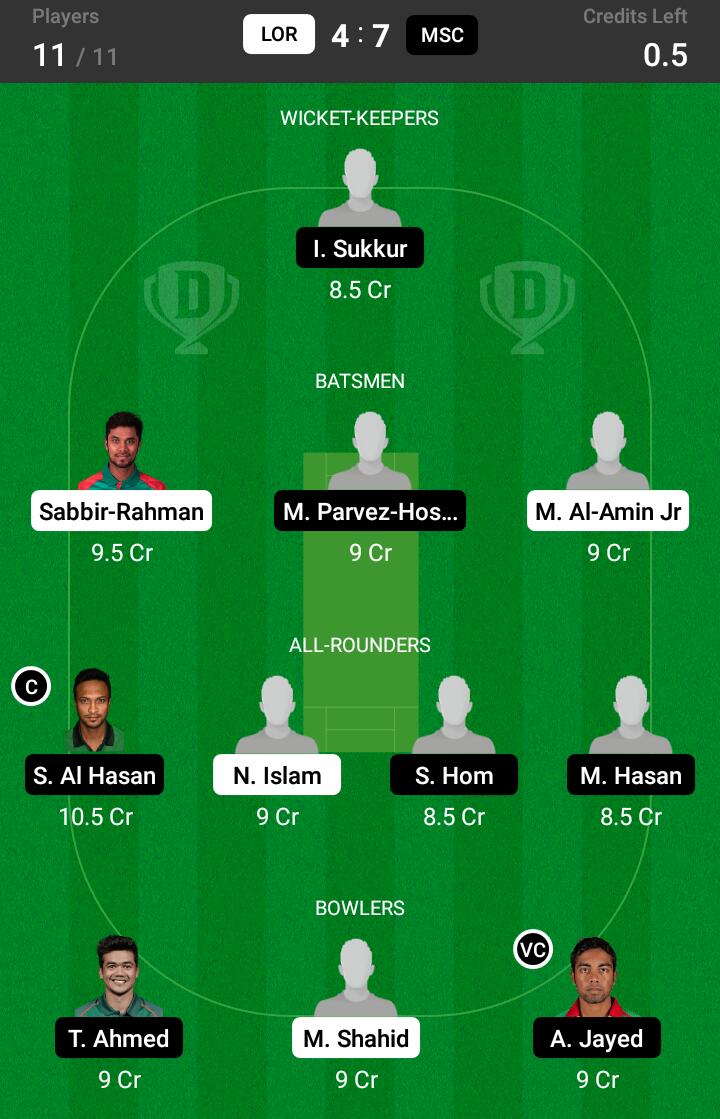