There’s a lot to take into consideration when you’re looking for the best LAL vs SAS dream11 team. Today, We are going to discuss LAL vs SAS Match news, LAL vs SAS fantasy Basketball prediction, and dream11 Expert data. This League is called NBA 2020-21 in the dream11 app.

Los Angeles Lakers vs San Antonio Spurs, The match will be played in Staples Center on 8 January 2021 at 8:30 AM.

They will play for more minutes and their usage in assists, rebounding will be more.

Davis finnally got his ceiling points in the last game ending up with 58 fantasy points. Spurs are weak in defending forwards section and Davis once again will have his ceiling game. Usage rate in rebounding has been decreased for Davis and this leads in reducing his fantasy outcome. James is the next core play for this game. He can post big outings at anytime. James can stack up steals+blocks and also can grab rebounds. He can give you in all the aspects.

Lakers are very strong in defense and playing at a slow pace, while Spurs are playing at fast pace. It can be slow going pace game where we can expect 210-220 points from the both ends. Johnson is intriguing option as he posted 44 fpts against the Lakers in the last meeting.

According To Recent and h2h match stats, Lakets are performing well and are slightly dominating in all aspects in this seasons so far. Offensively And Defensively, Lakers are strong and dominating in opposing the frontcourt points to the opponents. So It’s Better To select best players from Lakers into your roster.

5. According to H2H and recent results, Lakers have a slow pace, while Spurs have fast pace to play. 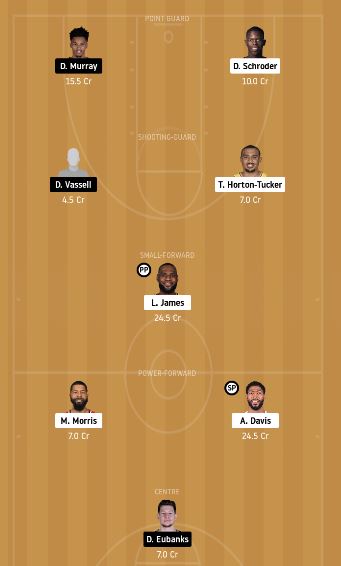