There’s a lot to take into consideration when you’re looking for the best LAH vs QUE dream11 team. Today, We are going to discuss LAH vs QUE Match news, LAH vs QUE fantasy Cricket prediction, and dream11 Expert data. This League is called Pakistan Super League T20 in the dream11 app.

Lahore Qalandars vs Quetta Gladiators, The match will be played in The National Stadium at Karachi on 22 February 2021 at 7:30 PM.

Pitch Report: The National Stadium at Karachi is a batting friendly. There is a ample swing with the new ball, Meanwhile The spinners should also get some turn off the surface, holding them in good stead in the middle overs.

Lahore Qalandars won the last match against Peshawar Zalmi by 4 wickets. Hafeez and Shaheen Afridi played an out standing performance in last match.

Fakhar Zaman and Sohail Akther would open the Innings. Fakhar Zaman has not played a good innings so far. He is a good attacking player.

Mohammad Hafeez is the skipper , he is a talented player and a promising run scorer. He has scored 312 runs in his 12 matches against Quetta at an average of 28.36 and the best score of 77.

Quetta Gladiators lost against Karachi Kings in last match by 7 wickets. Batsmen failure is the main reason for the defeat.

Chris Gayle looked in a great touch, he had scored 39 runs in last match.

Tom Banton got out for 5 runs in last match. He has plenty of shots in his arm. He is someone who can anchor the innings and hit the big shot at the same time.

Sarfaraz Ahmed, he can also build the innings and can bat 20 overs, if he opens again, he will be a good choice of VC in Grand Leagues. In 10 matches, he has scored 217 runs at an average of 31 with best score of 51 not out.

Ben Cutting , The Aussie all-rounder look good with the bat in the first match. He has scored of 51 and 0 in his two innings against Qalandars, along with 2 wickets.

M Hasnain and Usman Shinwari , both emerging players have performed in their matches respectively.

Gayle is looking in great touch, if he settles down we can expect a high score. 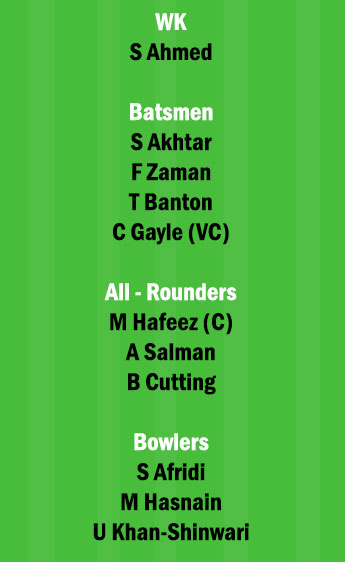