There’s a lot to take into consideration when you’re looking for the best KSV vs FCT dream11 team. Today, We are going to discuss KSV vs FCT 43rd Match news, KSV vs FCT fantasy Cricket prediction, and dream11 Expert data. This League is called Fancode ECS T10 Kiel 2021 in the dream11 app.

Kummerfelder Sportverein vs First Contact, The 43rd match will be played in Kiel Cricket Ground on 11 June 2021 at 4:30 PM.

First Contact is a weak side. They won last game against SGH by 9 wickets. They have played 8 game lost 6 while winning only 2.

D Singh bats 2 down and can also bowl few overs if require.He has scored 82 runs in 4 games and picked up 4 wickets.

Try S Kakkar in your teams, as He will bat 2 down. He will also provide keeping points. Kakkar has scored 12 run 1st 2 game. He is not playing since last few games.

Try A Jabarkhel in your teams, as He will also open in some games also bat lower order. Jabarkhel will also provide keeping points. He scored 40 run 1st 8 game also picking 2 wickets.

S Azam Khan and A Ahmad Khan are must have from this section.

S Azam Khan is must have from this department, will bowl 2 overs in start can pick 1-2 wickets. He has picked 1 wicket in 8 games. He is also opening inning and has scored 203 runs.

A Ahmad khan is basically bowler but does not bowl all games and bat low.

M Samiullah is must have from this department, will bowl 2 overs can pick 1-2 wickets also bat 1 down. He has picked 2 wicket in 2 games. He bats in top order and has scored 88 runs.

M Ahmad also must have player from this section will open and will also bowl 2 overs, He has scored 321 runs and picked 3 wickets in 8 games.

V Moyo is best bowler for KSV and has ability to pick wickets in bunch. He has taken 7 wickets in 8 games.

Zakrullah Zakhail is must have from this department, will bowl 2 overs in start can pick 1-2 wickets. He has picked 1 wicket in 8 games. He is also opening inning and has scored 126 runs.

Z Shah also must have player from this section will bat in top3 and will also bowl 2 overs, He has scored 88 runs and picked 4 wickets in 5 games.

M Said and A Soni are wicket taking bowler so dont ignore them. M Said has taken wickets in games.

A Amarkhel is bowling allrounder will bowl 2 over. He also bats 5 down. 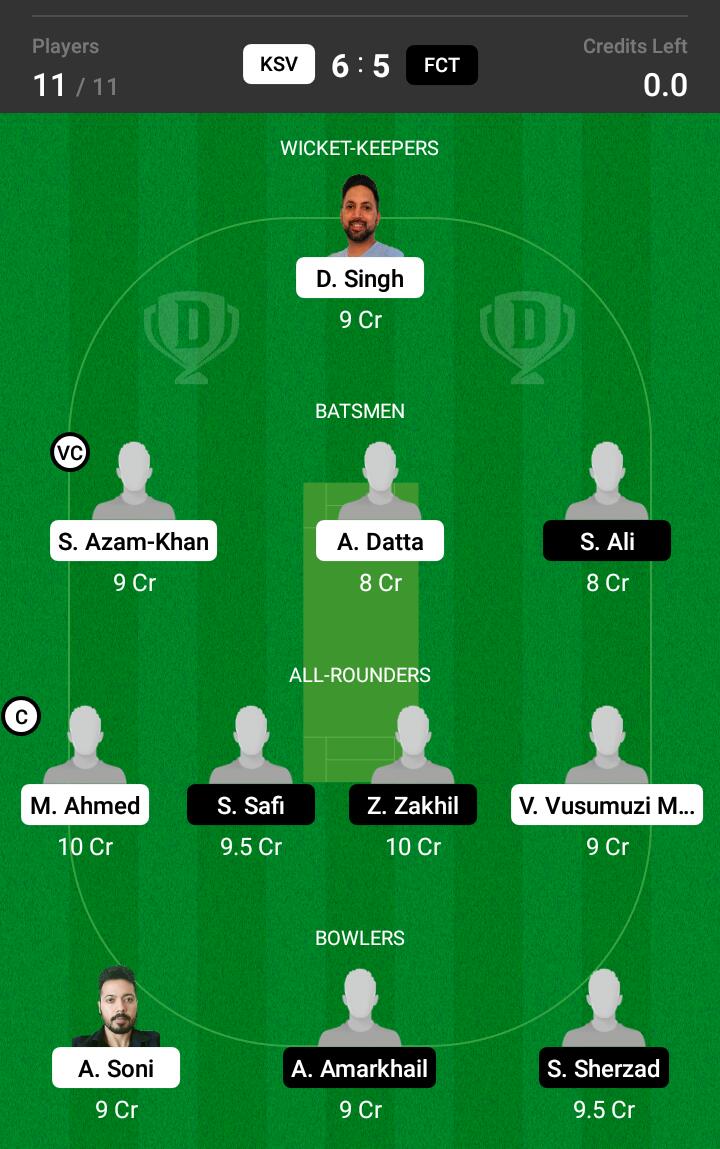