There’s a lot to take into consideration when you’re looking for the best JAM vs SIN dream11 team. Today, We are going to discuss JAM vs SIN 18th Match news, JAM vs SIN fantasy Cricket prediction, and dream11 Expert data. This League is called BYJU’s Jharkhand T20 2021 in the dream11 app.

Jamshedpur Jugglers vs Singhbhum Strikers, The 18th match will be played in JSCA International Stadium Complex on 25 July 2021 at 1:00 PM.

Jamshedpur Jugglers is a very good side and has won 3 games out of 5 games they have played and will look to keep winning momentum.

Singhbhum Strikers is a very inconsistent side and has won just 2 games from 5 games they have played.

A Kumar will bat at one down and is very good player, is a very skilful player, will also look to contribute some runs in the middle order. He score 93 run in 2nd game but failed other games. He did not play last game.

S Sagar will bat at one down and is very good player, is a very skilful player, will also look to contribute some runs in the middle order.

V Kumar open the innings for JAM. V Kumar who open the batting for his side and great hitter of bowl and can also bowl few overs. He has scored 73 runs in last 4 game.

R Khan and U Sethi bat in top order and are good player but has not done anything yet in this series.

K Karan has been consistent for SIN opening inning. He scored brilliant half century 1st game but failed after 1st game. He has scored 94 runs in last 5 game.

W Beng bat 1 down and is timing base player. He is little inconsistent as mostly waste his start.

A Kumar is basically a bowler who also very good batsman but did not bowl last game. He has scored 91 runs in last 5 game.

A Surwar will finish the inning, basically a bowling allrounder. He has scored 106 runs and picked 3 wickets in last 5 games.

V Singh is very consistent batsman who bat 1 down and can also bowl few overs if needed. He has scored 124 runs in last 5 game also picked 2 wickets.

B Krishna is very good bowler who has ability to pick wickets in bunch and also very good finisher with bat. He has scored 71 runs in last 5 game also picked 9 wickets.

A Kumar and J Singh will be the opening bowler for JAM, A Kumar has good domestic record and very experienced bowler for them, P Sheet will assist them and known for bowling economic spell.

A Yadav and A Lala are 2 wicket taking bowler for SIN. Both are consistent with wickets. 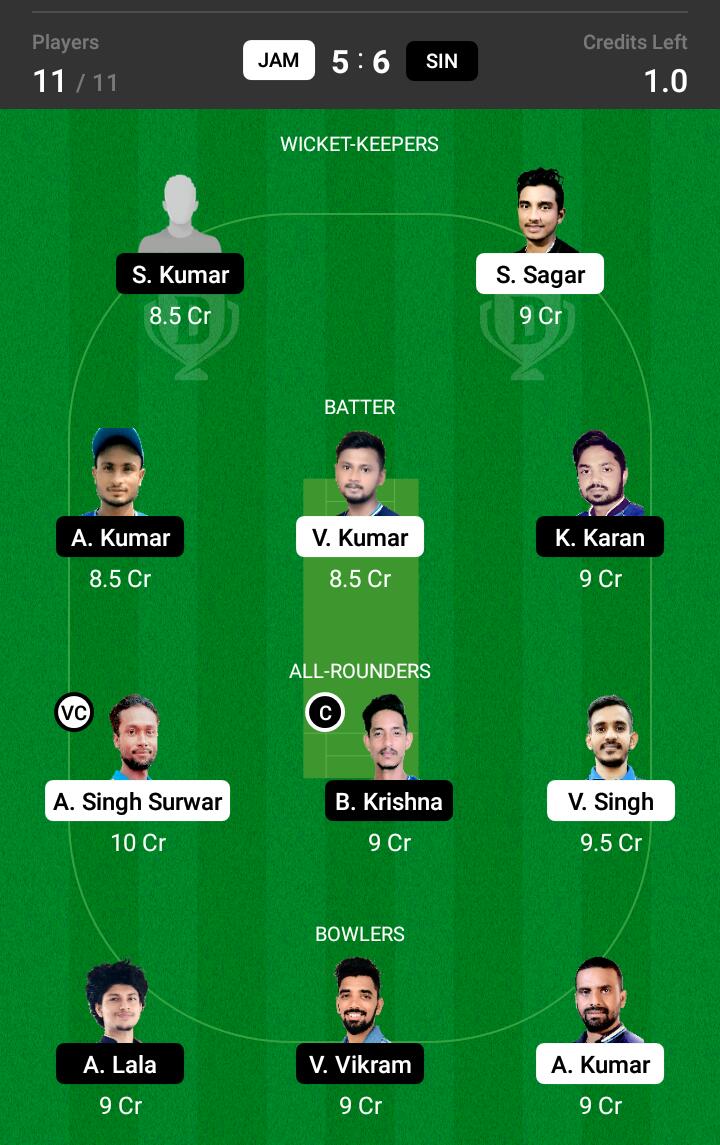