There’s a lot to take into consideration when you’re looking for the best ISL vs QUE dream11 team. Today, We are going to discuss ISL vs QUE 19th Match news, ISL vs QUE fantasy Cricket prediction, and dream11 Expert data. This League is called Super League T20 2021 in the dream11 app.

Islamabad United vs Quetta Gladiators, The 19th match will be played in Sheikh Zayed Stadium on 11 June 2021 at 9:30 PM.

Islamabad United is a very good side. They have played 5 games and won 3 game. They lost last game against LAH by 5 wickets.

Quetta Gladiators is at bottom of points table with just1 win in 5 games but now there looks strong and will look for change in fortune.

Azam khan is very attacking batsman and bat in top 4. He has been also selected in PAK national side after showing immense talent.

S Ahmad will be crucial for QUE and will also keep. He will bat 2 down and has scored 185 runs in his last 5 PSL games.

R Nazir will keep for ISL. He is highly rated in domestic cricket. He will bat in middle order. Nazir has scored 34 runs in last PSL game he played. He scored 8 runs last game.

C Munro is hit or miss type can destroy bowling lineup on his day, but lack consistency. He scored 11 runs last game.

U Khwaza is expected to w bat 1 down and a good player to have in your team, very consistent batsman. He scored 15 runs last game.

B King if plays will debut and open. He is basically timing base player so these pitches might suit him.

F Du Plesis is new signing by QUE. He will bat 1 down and his recent form is very good.

C Delport another SA player known for playing t20s all over world.

J Weatherland impressed everyone in big bash while opening inning but 1st time will play in subcontinent.

A Russel need no intro. He is best allrounder specially in t20 format. He can be easy choice of captain vc.

M Nawaz is very good spinner who also bowl in powerplays. He can also be promoted for hitting purpose.

J Wildermuth another AUS known for variation in his bowling and also very good finisher.

Hasan Ali and M Wasim will lead bowling attack for ISL. H Ali is most improved all rounder in last 1 year. So good choice of captain vc in gl team, while M Wasim has ability to take wicket in bunch.

M Hasnain and U Khan will lead the pace attack for QUE, Anwar Ali and Naseem Shah will assist them, while Zahoor Khan and Z Mahmood will handle the spin bowling .

M Hasnain is very good bowler and their main pacer has been in very consistant form. He has knack of picking wickets. He has picked 6 wickets in his last 5 PSL games. 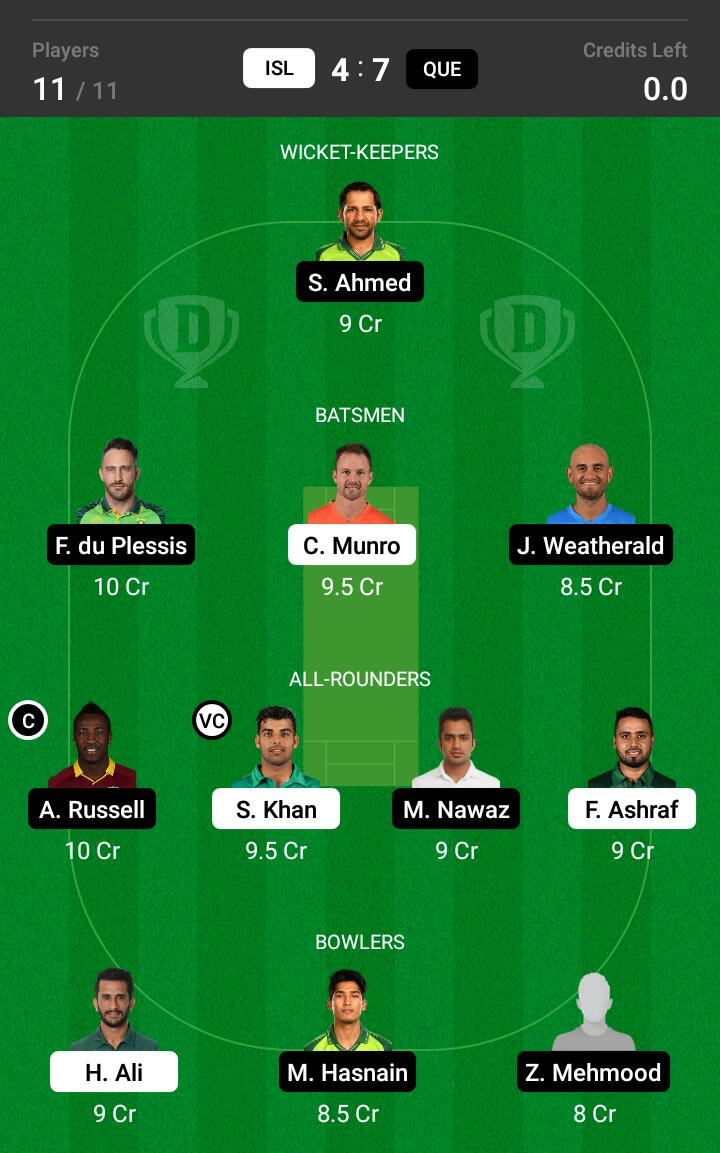