There’s a lot to take into consideration when you’re looking for the best ISL vs LAH dream11 team. Today, We are going to discuss ISL vs LAH 21st Match news, ISL vs LAH fantasy Cricket prediction, and dream11 Expert data. This League is called Super League T20 2021 in the dream11 app.

Islamabad United vs Lahore Qalandars, The 21st match will be played in Sheikh Zayed Stadium on 13 June 2021 at 6:30 PM.

Islamabad United is a very good side. They have played 6 games and won 4 game. They won last game against QUE by 10 wickets.

Lahore Qalandars has played 6 games won 5 games while loosing 1 game and are strong side. They beat PES by 10 runs last game.

C Munro is hit or miss type can destroy bowling lineup on his day, but lack consistency. He scored 11 runs last game.

U Khwaza will open inning and a good player to have in your team, very consistent batsman. He scored 55 runs in last 2 game.

F Zaman, S Akhtar will open the innings for LAH. Both have been in good form.

F Zaman is very attacking player and must have in your team. He has scored 189 runs in his last 4 PSL games. He has scored just 18 run in last 2 game.

S Akhtar always score very good player. He has scored 44 runs in his last 4 PSL games before break. And 47 runs in last 2 game.

T David has been best find for them. He is performing brilliantly and showing he can be great finisher. He has scored 87 runs in 2 games.

Shadab Khan, F Ashraf will take care of the late-hitting job, will provide points with both bat and ball and Ashraf is very good medium pacer, He has scored 49 runs in his last 4 PSL games and picking 3 wickets. He missed last game.

Shadab Khan is their captain has been in brilliant form, with bat coming at no 4 and He has scored 32 runs in his last 4 PSL games also picked up 4 wickets. Till now he has scored 7 runs and picked up 2 wickets in 2 match.

M Hafeez will bat 2 down and is a very consistent batsman has been in superb form plays all around world, now will also bowl. He has scored 186 runs in his last 4 PSL games. He scored 31 run in last 2 game.

J Faukner will finsih inning and bowl in death. He took 3 wicket on his PSL debut and followed with 2 wicket next game.

Hasan Ali and M Wasim will lead bowling attack for ISL. H Ali is most improved all rounder in last 1 year. So good choice of captain vc in gl team, while M Wasim has ability to take wicket in bunch. H Ali has taken 4 wickets in 2 matches so far.

F Ahmad and Z Gohar will take spin responsibity with S Khan. F Ahmad plays all around world is very good leg spinner. Both did not play last game.

A Javed and M Khan are find for ISL this season have been bowling well and also picking wickets. M khan took 2 wicket last game.

S Afridi, H Rauf will lead the pace attack for LAH, D Hussain and A Daniyal will assist them, while S Prassana and Rashid Khan will handle the spin bowling . S Afridi is very good bowler and their main pacer has been in very consistent form but has taken only 2 wickets in last 2 games. H Rauf has knack of picking wickets.
H Rauf has picked 4 wickets in his last 3 PSL games.

Rashid Khan will be crucial as these pitches will suit him and now he has too much experience of these grounds. He has taken 6 wickets in 2 games also scoring 23 runs with bat. 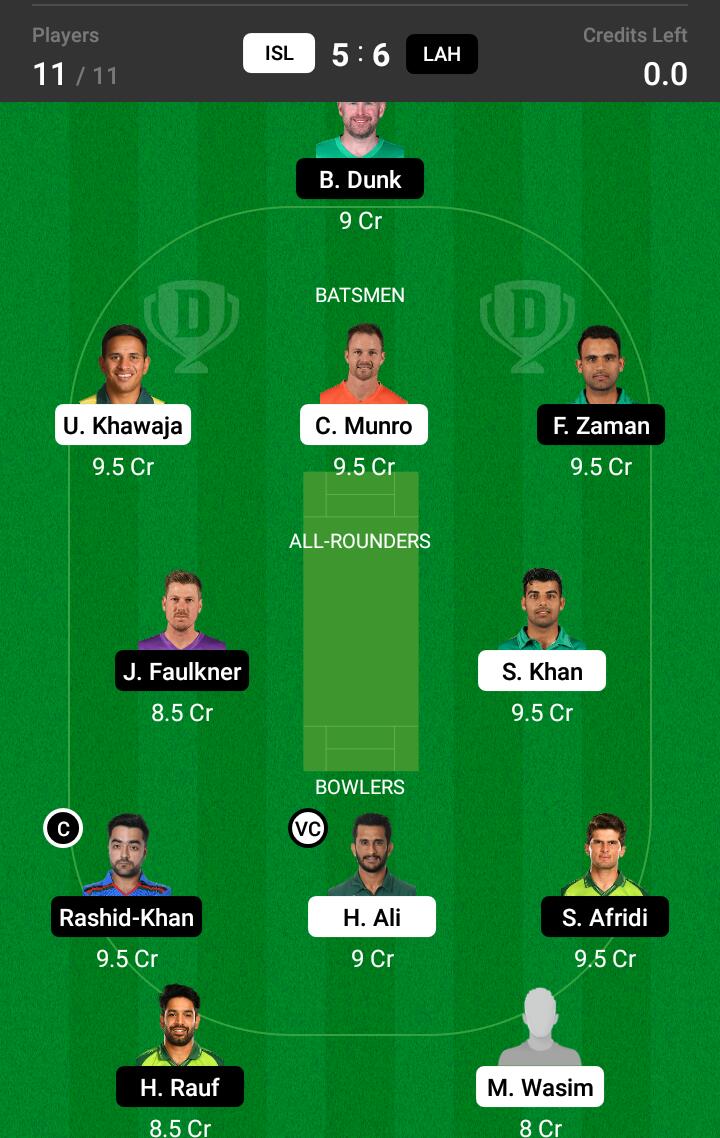