There’s a lot to take into consideration when you’re looking for the best ISL vs KAR dream11 team. Today, We are going to discuss ISL vs KAR 23rd Match news, ISL vs KAR fantasy Cricket prediction, and dream11 Expert data. This League is called Super League T20 2021 in the dream11 app.

Islamabad United is a very good side. They have played 7 games and won 5 game. They won last game against LAH by 28 runs.

Karachi Kings is one of the strongest side and but lost last game by 12 runs against MUL. They have played 6 games won 3 while also loosing 3.

C Walton will bat 2-3 down and keep for KAR. He has been very consistent in PSL but his recent form is not great. He has scored 35 run last game.

C Munro is hit or miss type can destroy bowling lineup on his day, but lack consistency. He has scored 105 runs in last 3 game.

U Khawaja will open inning and a good player to have in your team, but his recent form is not good. He has scored 55 runs in last 3 game.

A Ali is also handy player down the order but hit or miss type. He is clean hitter of bowl but his recent number are not good. He scored quick 75 last game when his team was struggling.

B Azam and M Guptill are expected to open for KAR. B Azam is currently best player in t20s and has been very consistent. He has scored 85 run last game.

M Guptill did not have good debut in PSL got out after scoring just 11 run but is very attacking NZ batsman.

Sharjeel Khan is expected to open or bat 1 down he is game changer can change game in few balls. He scored 4 run last game.

N Zadran from Afg will play in middle order and is very good finisher and if top order collapse he always safeguard his team. He has scored 11 run last game.

D aziz is batting allrounder who bowl medium pace and bat 3-4 down. He did not play last game.

Shadab Khan, F Ashraf will take care of the late-hitting job, will provide points with both bat and ball and Ashraf is very good medium pacer, He has scored 49 runs in his last 4 PSL games and picking 3 wickets. He missed last 2 games.

Ifthikhar Ahmad if plays will bat 3 down and can also bowl few over of spin. Try him in gl teams. He rescued his team last game wth quick 49 runs.

I Wasim will lead KAR and he will bat 3 down and bowl 4 overs mostly he bowls in powerplay and pick wicket there. He took 1 wicket last game.

T Perera very attacking allrounder from SRI who has just retired from international cricket will finish inning for his side and bowl 3-4 overs. He took 2 wicket last game.

A Yamin is bowling allrounder and has ability to pick wickets must try in gl teams if he plays.

Hasan Ali and M Wasim lead bowling attack for ISL. H Ali is most improved all rounder in last 1 year but will not take furthur part in PSL as he has return home. while M Wasim has ability to take wicket in bunch. M Wasim has taken 2 wickets in 2 matches so far.

M Amir and A Iqbal will lead bowling attack for KAR. A Iqbal was the find of PSL last year in which he impressed everyone with his wicket taking abilities.

M Amir has retired from international cricket at so early but he will play PSL and he is very experienced bowler. He has not taken any wicket in last 2 game.

N Ahmad from Afg is known for variation must try whenever plays.

F Ahmad and Z Gohar will take spin responsibity with S Khan. F Ahmad plays all around world is very good leg spinner. Both did not play last game.

A Javed and M Khan are find for ISL this season have been bowling well and also picking wickets. M khan took 5 wicket last 2 game. 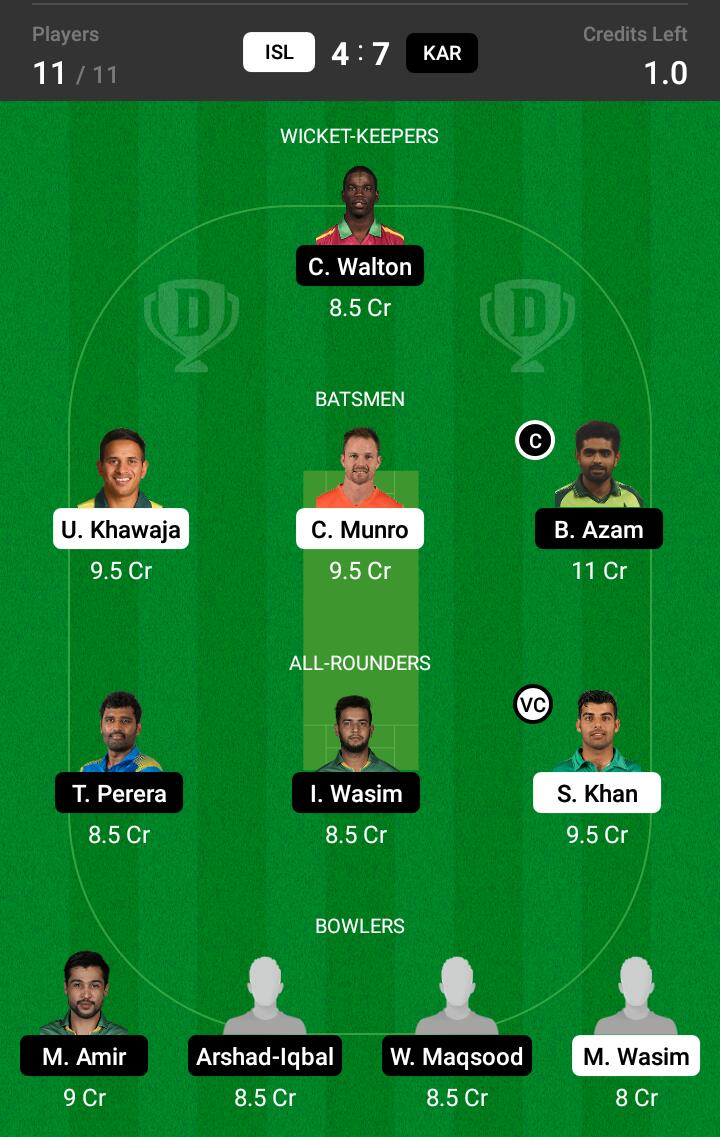