There’s a lot to take into consideration when you’re looking for the best IRE vs SA dream11 team. Today, We are going to discuss IRE vs SA 1st T20 Match news, IRE vs SA fantasy Cricket prediction, and dream11 Expert data. This League is called South Africa tour of Ireland 2021 in the dream11 app.

Ireland is the most improved associate nation in last 2-3 year as now they have started winning against strong side. They beat SA in 1st odi by 43 runs 1st time in history but this will be different format.

South Africa is a very strong side but past 1-2 year they have been very inconsistent side and 1st time lost a match against IRE but this is different format in which SA are more strong.

L Tucker bats 2 down in domestic but here playing 4 down. He scored 54 run in last 3 matches before this series. He will provide keeping points so can take him in gl teams.

Q Decock has been best player for SA across formats. He has been in red hot touch. He scored 120 run last game.

K Verreyne played who is very consistent middle order batsman in domestic circuit but could score only 13 run in 1 game he got chance to bat.

P Stirling opens and has ability to score big in few balls. He scored 38 runs in last 2 game.

A Balbirine bats 1 down most consistent batsman in Ireland cricket at present, He scored brilliant 102 2nd last game in odi.

W Porterfield opens but not consistent. He is very experienced player and former captain. His recent form is not good so J Lawlor is expected to play ahead of him as he has been in good recent form.

R Dussen has been consistent since his arrival to international cricket. He scored 79 runs in last 2 game.

J Malan and A Makaram whoever play are must try as they have been in good form in domestic and open. J Malan score 177 run last game

D Miller looked good in games he played before wasting his start.

M Adir if plays will bat 5-6 down and bowl 4 over so good captain vc choice. He has picked 5 wicket and scored 73 runs in last 3 games.

A Mecbine is also must have from this department, will bowl 3-4 overs in middle can pick 1-2 wickets. He has picked 5 wicket in last 3 games also scored 93 runs in 3 games before this series batting in top order. He took 2 important wicket last game also score 30 run batting 1 down.

A Phehlukwayo also bowl in death and bat 5 down so good gl captain choice if get chance to play. He took 5 wickets in last 2 game.

G Dockrell will bat 4 down and bowl 3-4 over so good captain vc choice. He has picked 2 wicket and scored 297 runs in last 5 games. He is not getting much overs here.

B Mecarthy is must have from this department, will bowl 10 overs can pick 2-3 wickets. He has picked 16 wicket in 5 games in domestic. He missed last game.

Try G Young in your teams. He will be opening bowler for side. Young picked up 3 wicket in 3 game before this series. He took 3 wicket 1st game and 3 wicket 2nd game last series.

A Nortze and T Shamsi are must try player in your team. A Nortze has not picked much wicket last series but bowling very well and has been economical. K Maharaj played last game and bowl very well.

J Little has been in very good form has picked up 7 wickets in 2 games last series. He picked 4 wickets in last 2 game. 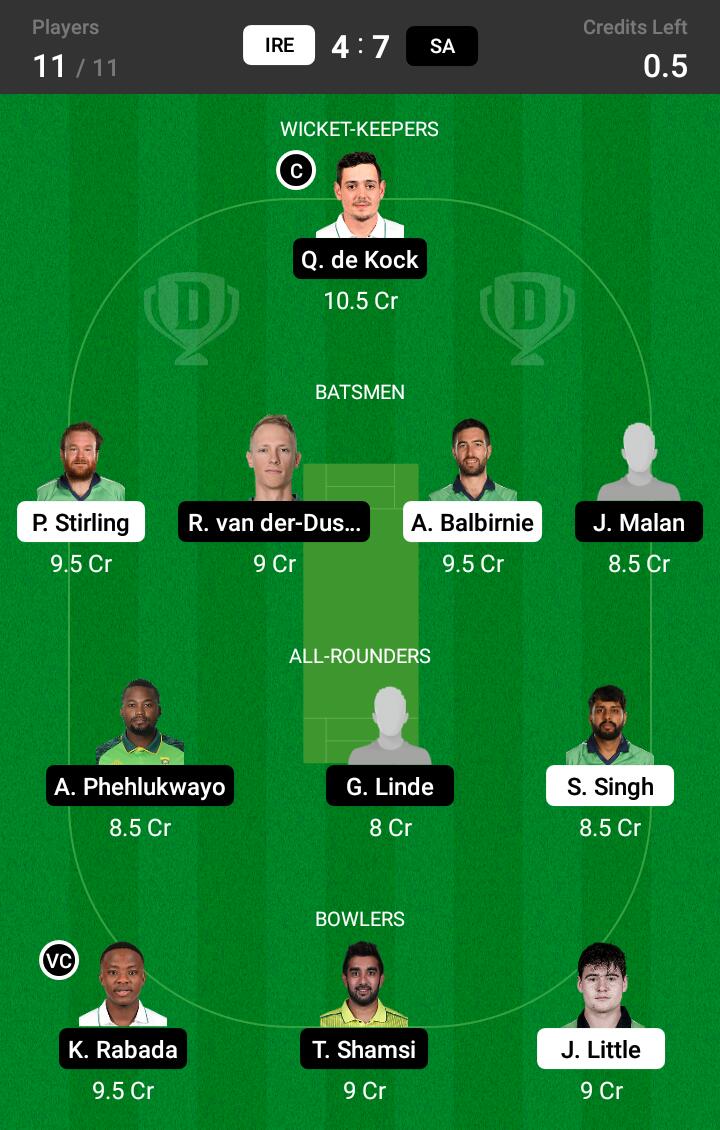