There’s a lot to take into consideration when you’re looking for the best IN-L vs WI-L dream11 team. Today, We are going to discuss IN-L vs WI-L 6th Match news, IN-L vs WI-L fantasy Cricket prediction, and Expert data. This League is called Road Safety T20 World Series in the dream11 app.

India Legends vs West Indies Legends, The 6th match will be played in Green Park, Kanpur on 14 September 2022 at 7:30 PM.

A clinical performance from both India Legends and West Indies Legends which end up with a big win and both the team would like to Pull out all the stops to retain their victories.

Naman Ojha (wk) ability to get big runs in the top order, he is one to watch out for in this game.

William Perkins (wk) has been inconsistent, he has the track record and experience of making a strong comeback.

Yuvraj Singh hasn’t perform well in previous matches but he would definitely be a backbone of this team .

Suresh Raina plays in one down position and he standard player and would like to make a more significant contribution.

Sachin Tendulkar , No matter what format it is, Sachin has never failed to impress us with his performance, He is a dependable option and he is capable of some big hits.

Kirk Edwards will definitely be the major players of this batting line-up and give valuable contribution to this team. He has scored 121 in last 5 matches.

Danza Hyatt is a desirable player However, he didn’t look as fluent as he usually does.

Yusuf Pathan is a allrounder for this team squad and he is a obvious pick. He has scored 187 runs in last 5 matches.

Irfan Pathan is capable of bowing over an batting which make him an invaluable asset. He has been very consistent and has performed in almost every game that he have played.

Binny deserves massive applause for his gritty knock against South Africa ,He scored 82 runs in just 42 balls with the help of 5 fours and 6 six.

Krishmar Santokie will be our all-rounder from the West Indies Legends, He will be one to watch out for in Bowling than batting. He has pick 7 wicket in last 5 matches.

Dwayne Smith (c) will be our batsmen from the West Indies Legends and he slammed an unbeaten fifty against Bangladesh Legends.

Pragyan Ojha bowls at middle order for 2 overs and he has picked a couple of wickets in last match.

Rahul Sharma is a genuine wicket-taker and also bowls with very good economy. He has looked ominous with 9 wickets in last 5 matches.

S Benn has scalped 8 wickets last in 5 matches and could be really dangerous to India Legends.

D Mohammed is the important bowlers of the side and will took some decent number of wickets as well.

Bishoo can perform well on the field which is just a bonus towards his bowling skills that earned him 1 wicket in last matches at economy rate of 5.80. 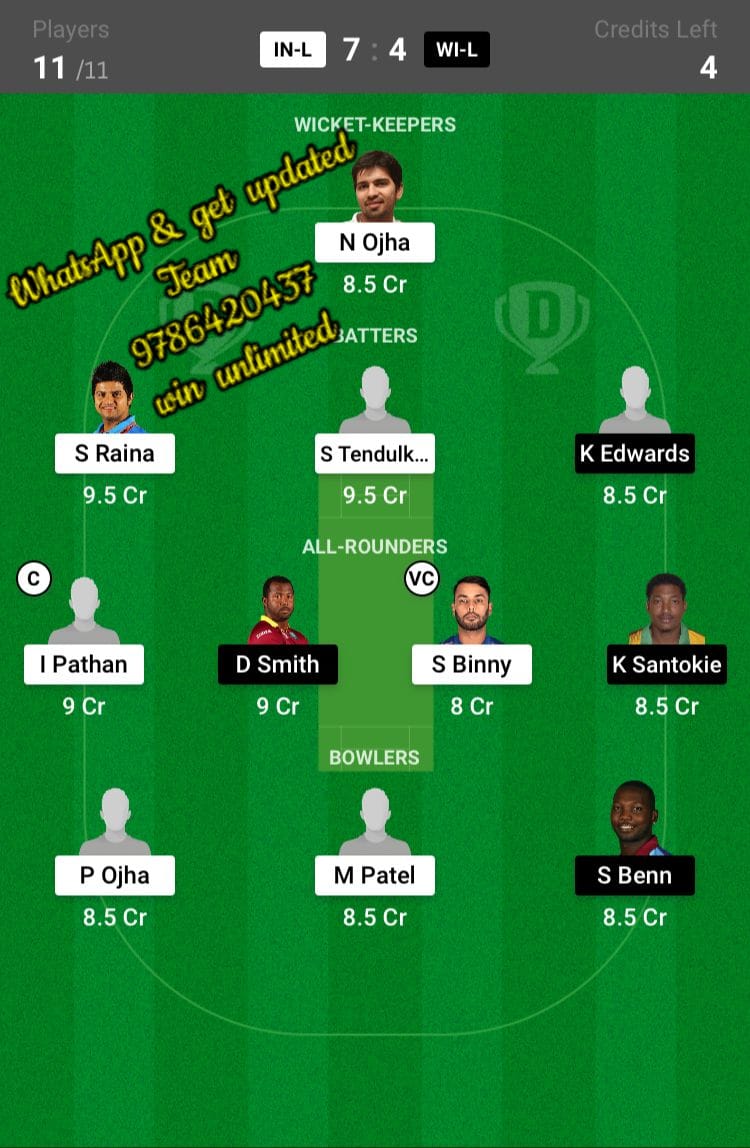