Hobart Hurricanes vs Brisbane Heat, The 20th match will be played in The Gabba, Brisbane on 30 December 2020 at 1:45 PM.

He is the safest option for your teams and is high on confidence ever since his test century in the warm up game against India A.

He is a good batsman and the skipper too but sends himself to bat at No.7 which isn’t indicative of how well he actually bats. He is a must try in GL but can be avoided in SL.

He has been playing well but batting at No.5. He is a sure shot GL pick and can be picked in SL as well.

GL punt pick surely. He is the skipper of the team in the absence of Wade and hasn’t fired yet but can get going any day. Risky hit or miss pick.

He is the No.1 T20I batsman and is a very consistent batsman in this format of the game. He is a safe pick for your teams.

He is a must pick for GL teams. Plays a good cameo and has consistently given points in every game with the bat.

He looked good in the previous game and just missed out on a half century. He is also a Hit or Miss player currently but is a safe choice nonetheless as he’s an opener.

Unlucky dismissals in both the previous games. He is a good batsman in general and a difficult batsman to dislodge as well. Must try in GL.

With Faulkner out with a hamstring injury, he would be the ideal choice to replace him. He hasn’t picked a wicket in any of his previous 5 games, whether he played for the Hurricanes or the Windies and has been expensive. But, he had a great CPL season and can be a good pick for GL.

Hit or miss pick for GL. Can easily avoid in SL.

He just played one game in this season and announced his arrival in style with the ball. Although failed with the bat in the previous game, he’s a safe choice for your teams.

He showed his worth with the bat in the previous game with a blistering knock of a 19-ball 31. He can be tried in GL. He can also be avoided from your teams as he’s not being used as a bowler and batting at No.8.

He has been a wicket taker in every game and has been high on confidence ever since his century against India A in the warm up game. He is a safe pick.

Can get an assured 25 points from him and he has picked up atleast one wicket in every game this season and also can bat well down the order as a finisher if needed.

Neither has he performed well against this opposition over the years nor has he been a good bowler on this venue. Even in the previous game against the same opposition on the same venue, he went for more than 12 as his economy and failed to take a wicket. Can try in GL but a risky prediction is to avoid him from your teams.

He has been a consistent wicket taker and has taken full advantage of his pace as well. He is a safe choice for your teams.

Worthy GL try. Even batted well in one of the previous games and can atleast give 25 points. With Wildermuth up to the All Round section, he could be a good choice from the bowling section for your teams.

He can be a good choice for your teams. He didn’t do much in the previous game but can be a worthy GL pick.

D’Arcy Short, Lewis Gregory, Ben McDermott and Jack Wildermuth are safe options and consistently give good points. They can be easily tried as C/VC in SL teams.

Max Bryant, Colin Ingram and Peter Handscomb are Hit or miss players and can be risky but surely could be tried as C/VC in GL teams. Other than them, Jimmy Peirson and Dawid Malan are good choices for the same. 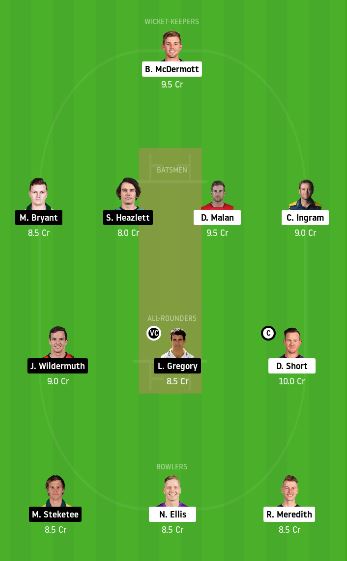 If you are like our HUR vs HEA dream11 prediction. Please share this article with your friends, who are playing dream11 fantasy leagues. Don’t forget to follow us onTwitter, Telegram, and Youtube for the best dream11 tips and tricks.