He is a good batsman but doesn’t have a fixed batting position and can come to bat anywhere between 5-7, which isn’t indicative of how well he actually bats. He is a must try in GL as both keeper options are equally hit or miss player, but can be avoided in SL.

A hit or miss player. Must try in GL and can be a safe pick for your teams due to his previous performances as well as because Peirsom bats way down the order, and he could bat well if he does get the chance.

He is the skipper of this side and after a horrendous 2020 CPL season and an entire IPL season on the bench, he has found his touch back as soon he got to the Australian wickets and has been looking in sublime form. Safest pick from the batting section in current form. He has 4 50s to his name this season in 9 games with just onr score less than 20.

He has been having a great time in the Test format of the game and would want to show his worth with the bat in this format too. He doesn’t have many T20 games to his name but would want to make a name here too and continue his momentum with both bat and ball.

He is a hit or miss player. He has a fifty to his name in this season and although failed in that 10 over contest, he is still a good GL try for your teams. With Swepson being the only spinning option in this team, he can even bowl an over or two if needed.

He has been leading from the front and has been giving consistent points with the bat. Ashton Turner has demoted his batting order to No.6 and can be tried in GL and can be avoided in SL. He even bowled an over in one of the previous games as well as in the previous one, but isn’t likely to be bowling in every game as such. He can be avoided from your teams too.

Hit or miss player. Loves the T20 format, especially the English T20 Blast, and has shown his worth there. He had been failing miserably ever since his injury but gave a quick start in the first game he played here and had a good knock in the previous games too, and loves these fast paced wickets. Safe pick in the current form surely. He’s giving good starts however but just was able to convert it into a good score once. Can avoid in SL and keep him as C in GL to compensate for any loss, if any.

Colin Munro has been consistently playing well and is a very safe choice for your teams. He is high on confidence after scoring 4 50s in the previous 7 games and can do well here again. He is a must pick.

He just played two games in this season and announced his arrival in style with the ball in the first one and then with the bat in the second. Then, continued his confidence and momentum and gave costant points with either bat or ball and can be a safe choice for your teams. He hasn’t done too much in the previous few games but is still a worthy try as he bowls a couple of overs and also bats at No.5.

He has been a wicket taker in almost every game and has been high on confidence ever since his century against India A in the warm up game. He is a safe pick and can assure you 25 points with the ball atleast.

He was playing really good as a middle order batsman as well as an accurate bowler before he went away for a couple of games with an injury. Although he did come back in the previous game, he couldn’t perform as such with the bat and isn’t bowling currently too. Can pick in GL if you feel he can score good points purely as a batsman or can avoid too.

Since he bats way down the order and isn’t bowling his entire 4 over spell in every game, he can be avoided in SL teams but a good GL pick. In the absence of Marsh as a bowling option, he would bowl a couple of overs, though has been wicketless in 5 out of the last 6 games, can be tried in GL.

Coming on the back of two half centuries, he has been playing well and in the absence of Marsh as a bowler, he has not only taken charge with the bat but also bowled a couple of overs and got a wicket to his name too, and is a safe pick from this section. GL punt pick surely. Can safely pick in SL if batting first especially.

He has been a wicket taker in both games where he bowled his entire spell and has been bowling really well. He is a safe choice for your teams if he does play in this must win fixture.

In the absence of Mujeeb, the team would have wanted to fill the void of the lack of spinners and here’s when Swepson has arrived into the squad and has done well over the years for the Heat and would love to have a great game here as well.

He has been bowling well but has also been subbed out thrice this season in just one over, even though he bowled well there too. Risky pick for your teams but can try in atleast one GL teams if he does play.

GL punt pick especially if their team bowls second. Jason Behrendorff could be good under lights and pick up wickets. He has been picking atleat one wicket consistently but still hasn’t been selected by many users, hence making him a trump pick for GL. He has taken atleast one wicket in each of the previous 8 games in this season that he has played and can be a worthy pick in SL too.

Try him in a GL team or two. He is a good bowler and been a consistent wicket taking option in this season. He can be safe choice for your teams due to the selection percentage although Behrendorff has been more consistent in terms of getting wickets.

Jhye Richardson consistently picks up wickets and is the safest pick from the Scorchers’ bowling unit. He has picked atleast 2 wickets on 7 occasions in 13 games this season and been wicketless just twice. He is a must pick.

Chris Lynn, Marnus Labuschagne, Colin Munro and Jhye Richardson are consistent performers and are safe choices to keep as C/VC in SL teams. 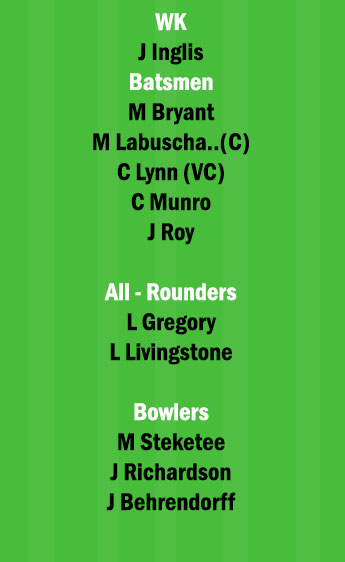 If you are like our HEA vs SCO dream11 prediction. Please share this article with your friends, who are playing dream11 fantasy leagues. Don’t forget to follow us onTwitter, Telegram, and Youtube for the best dream11 tips and tricks.