There’s a lot to take into consideration when you’re looking for the best HAM vs ESS dream11 team. Today, We are going to discuss HAM vs ESS 2nd Match news, HAM vs ESS fantasy Cricket prediction, and dream11 Expert data. This League is called English One Day Cup 2021 in the dream11 app.

Hampshire is a very ordinary this season in t20s. They have played 14 game won 6 while loosing 5 but this is different format.

Essex won last game against SUR by 8 wickets. They have played 14 game won 5 while loosing 6.

A Wheater will keep for ESS. He is not consistant with bat. He is expected to bat 4 down some games he has also played 1 down. He has scored 199 run in 8 game.

J Vince will open inning for HAM with D Short both are experienced international players. Both got start 1st two games could not convert to big score. Vince scored 326 run last 9 game. He scored his 1st odi hundred against PAK so will be high in confidence.

T Westley will open the innings for ESS, He is must have player as he is very good player. He has scored 122 run in 5 game.

M Pepper has been inconsistent but has experience and can be crucial if plays.

R Ten Doeschte if plays will be cruicial but his recent form is not great but he is very experienced player has played in IPL for KKR. He has scored 64 run in 8 game.

I Holland is bowling allrounder for GLA and has ability to pick wickets. He was not in good form in t20s.

D Lawrence very capable of batsman who can also bowl spin bat 1 down.

S Harmer will bowl spin and has ability to pick wickets in bunch and will bat 5-6 down. He has scored 81 run in 10 game and also picked up 16 wicket.

J Porter and S Cook will be important bowler for ESS, J Plom and A Nijjar will assist them. S Cook has picked up 14 wicket in 10 game. 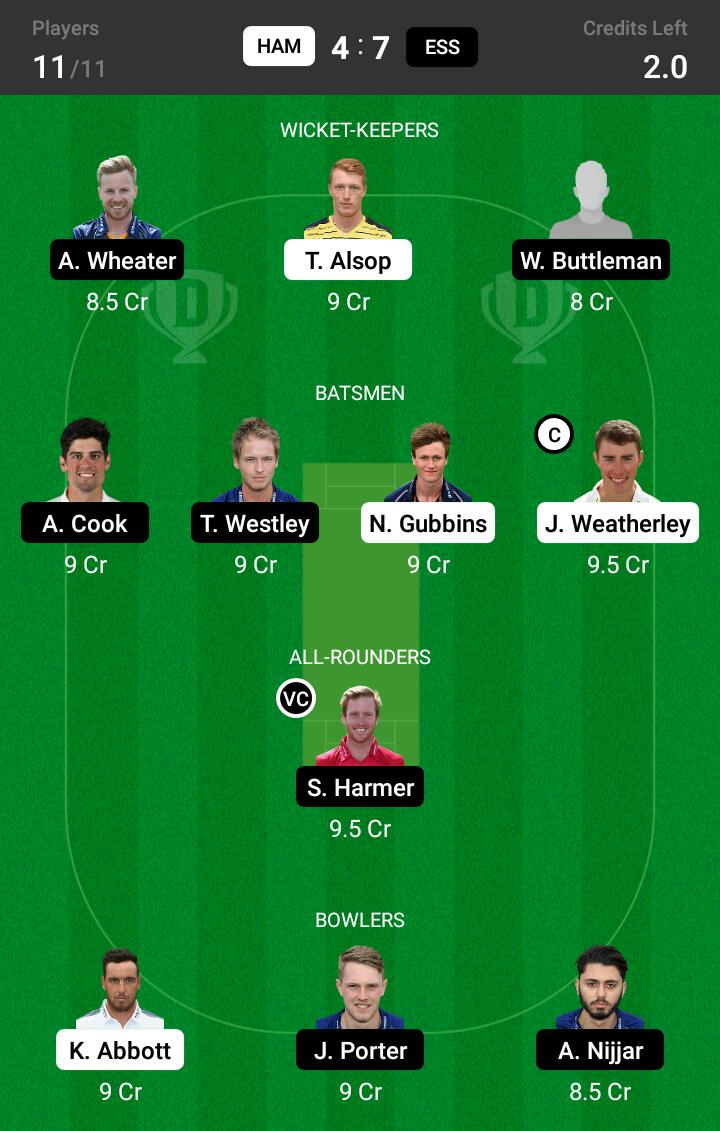