There’s a lot to take into consideration when you’re looking for the best GSW vs NOP dream11 team. Today, We are going to discuss GSW vs NOP Match news, GSW vs NOP fantasy Basketball prediction, and dream11 Expert data. This League is called NBA 2020-21 in the dream11 app.

Golden state Warriors vs New Orleans Pelicans, The match will be played in Chase Center on 15 May 2021 at 7:00 AM.

Pelicans has played 70 matches and won 31 and lost 39 and standing in 11th place as they already eliminated from playoffs even though they have great potentials like Zion Williamson (out), Brandon Ingram (out) and Lonzo ball (out). This team is so good with many young players and veterans like Eric Bledsoe, w. Hernangomez, N. Marshall, J. Johnson, W. Gabriel, Kiwei Lewis Jr, J. Hayes, N. Alexander walker, etc. Many of experts predicted that Pelicans will play playoffs but even though there are good players they choke, not play consistently and hugely rely on Zion Williamson. They may test their young players against Golden state Warriors as they already out of playoffs.

Once upon a time, warriors is called as Dynasty, super teams like that. But now played 70 games and won 37 lost 33 out of them. Standing 8th position in powerful western conference. Golden state try to win remaining games to play PlayInn to qualify PlayOffs. The team is hugely relying on Stephen Curry(out) . But it also has some good players like Andrew Wiggins, Draymond Green(out) , Kevon Looney, Juan Toscano Anderson, Kelly Oubre Jr(out) and Jordon Poole, kent Bazemore, etc. Back to back games won by Golden State Warriors with the help of Stephen Curry, Draymond Green and juan Toscano Anderson also played well. Golden State warriors will be good next season with the arriving of Klay Thompson whose is ruled of this season due to injury.

Pelicans has lots of injuries and rests so kindly check the lineup before game.

GSW vs NOP Match Players To Watch Out (Some Unknown Players):

Backup shooting guard is a good player who can shoot, rebound well is a good credit saver option. Will score big if he gets enough minutes.

New Orleans Pelicans main players are injured or rested. Only one or two senior players may play. So fully young unused players try them all. 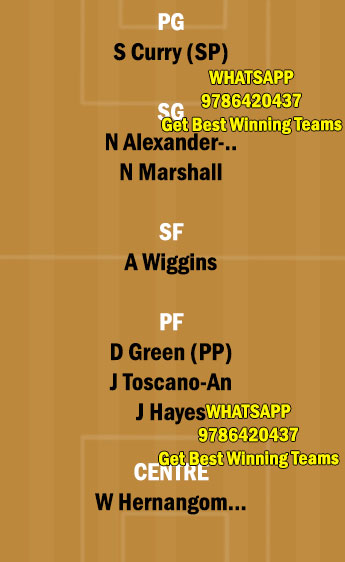