There’s a lot to take into consideration when you’re looking for the best GST vs LFL dream11 team. Today, We are going to discuss GST vs LFL Match news, GST vs LFL fantasy Basketball prediction, and dream11 Expert data. This League is called CBA League 2020-21 in the dream11 app.

Guangdong Southern Tigers vs Liaoning Flying Leopards, The match will be played in Bank of Dongguan Basketball Center on 1 May 2021 at 5:05 PM.

Guangdong Southern Tigers is the defending champions and strongest team in Cba. Now again beat other teams and qualified for finals and also won first match of Finals. Now trying hard to Defend the Championship. This team has many good players like Sonny Weems, Marshon Brooks (out), Rui Zhao, Peng Zhou, Mingxuan Hu, Jie Xu, Jenfei Ren, etc. This teams main positive is coach. This team has one of the best coaches. He will equally gives playing time to first unit and second unit.

Liaoning Flying Leopards is the second strongest team in Cba. Now trying to win championship against No 1 team in Cba. Even though they lost first match of finals. They comeback hard and beat Guangdong in second match of finals. Now only one match remaining to see who won the Cba championship 2021. Both team has equal chances. This team also has many good players like Zhenlin Zhang, jiwei Zhao, Ailun Guo, OJ mayo, K Fogg, Dejun Han, etc. Last two matches, star player Jiwei Zhao is not playing at his best.

GST vs LFL Match Players To Watch Out (Some Unknown Players):

Starting point guard is a excellent player and passer and scorer who chokes last two games and got himself in Foul trouble. If it’s his best day, you will expect 50+ fantasy points from him.

Backup point guard is a good player who plays some quality minutes and can score, rebound, assist and steal well. 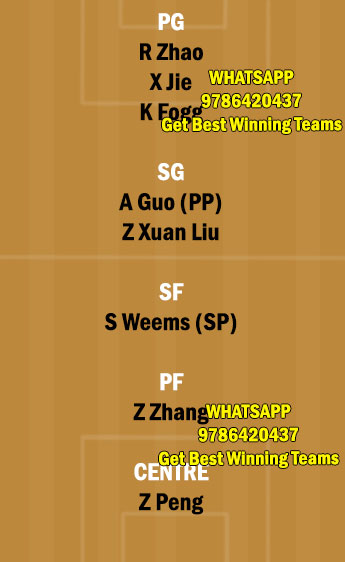