There’s a lot to take into consideration when you’re looking for the best GS vs BJSS dream11 team. Today, We are going to discuss GS vs BJSS 17th Match news, GS vs BJSS fantasy Cricket prediction, and Expert data. This League is called MCA T20 Cup in the dream11 app.

Global Stars vs Bukit Jalil Sports School, The 17th match will be played in UKM-YSD Cricket Oval on 6 August 2022 at 7:00 AM.

Bukit Jalil Sports School played only one match so far. They won the match against Lanka Lions by 19 runs.

Wan Muhammad is good choice in wicket-keeping section. Because, He will bat at one down position. BJSS bowling unit looks strong. So we can expect catch points from W Muhammad.

Ammar Hazalan will bat at lower down. Try him in GL teams.

Aslam Khan Malik batting style looks aggresive. He scored 59 runs against UFC team which includes five fours and five sixes. In second game also, He scored a quick 30 in 12 balls with 4 sixes. A Malik is a must pick for your GS vs BJSS dream11 team.

Mohammad Haziq Aiman scored 5 runs from 20 balls. He is opening batsmen. We cannot judge his performance from one game. Small league players take him.

Muhammad Faiz Ahmad will bat at 4th down. He also bowl one or two overs. We can skip him by taking additional bowlers.

M Idrees will open the innings or will bat at one down. Don’t miss opening order batsmen. They will surely get back 20 to 30 dream11 points.

Skipper M Nazril gone for golden duck in last game. So, Nazril selection percentage went down. You should try him in your small league teams.

Azri is lower order batsmen. You can try him grand league team.

Ajeb Khan will bat at middle order. He will bowl 2 to 4 overs. In first match he scored 63 of 23 balls and took 5 wickets. In second match he scored 13 runs and bowled only one over. So we can’t skip him in GS vs BJSS small league team.

L Nur Hakim will bat at opening. He will bowl 4 overs. In last match, He took 2 wickets and scored 47 of 30 balls.

N Abbas is a top order batsmen. He will bowl 3 to 4 overs. Abbas scored 37 and 67 runs in last two matches. He is good choice for captain and VC choice.

Amir Khan Malik will bat at top order. He is also a good bowler, who is capable of taking one or two wickets. Take him in today match dream11 team.

Ahmad Akmal is a middle order batsmen and will bowl 4 overs. Must try him in 4 members contest. He will bowl in death over.

M Faisal is the Skipper of GS team. He will bat in top 4 position. He also bowl 2 to 4 overs. The selection percentage is very low. So make him as captain in GS vs BJSS grand league teams.

M Luqman took 4 wickets in last game. He also contained the economic run rate. We can expect one or two wickets in today match.

Akram Malik is a death over bowler. He will bowl his 4 overs quota. Guys focus on death overs mainly. 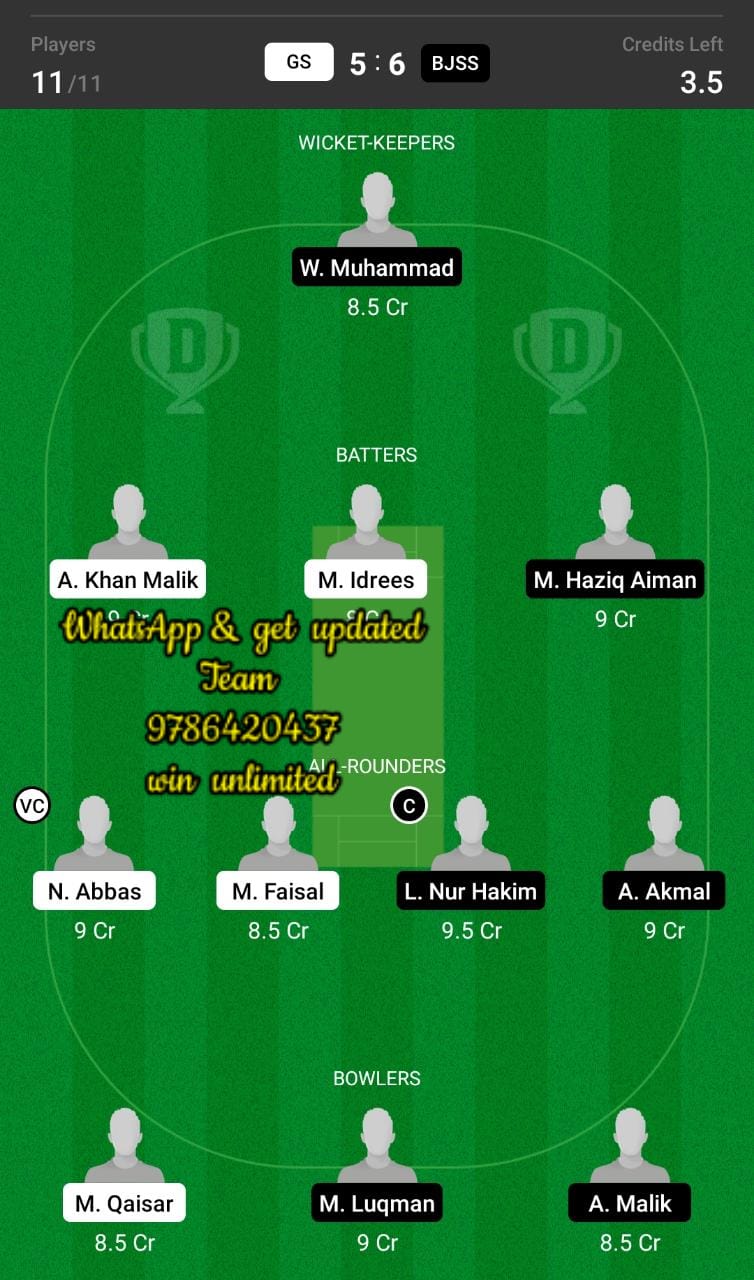