There’s a lot to take into consideration when you’re looking for the best GLA vs ESS dream11 team. Today, We are going to discuss GLA vs ESS 20th Match news, GLA vs ESS fantasy Cricket prediction, and dream11 Expert data. This League is called English T20 Blast 2021 in the dream11 app.

Glamorgan lost last game against GLO by 4 runs in a close encounter.

Essex won last game against SOM by 3 wickets. They have played 2 game won 1 while loosing other.

A Wheater will keep for ESS. He is not consistant with bat. Wheater is expected to bat 4 down some games he has also played 1 down. He has scored 2 run in 1 game. He did not play last game.

M Pepper will bat 1 down. He is inexperienced has only played lower level cricket. He has scored 18 run in 2 game.

W Buttleman will open and keep for his side but not consistant with bat. He has scored 2 run in 1 game.

C Cooke is very experienced player also lead side. He bat 3 down so can be dropped in small league if you want to take risk. He has scored 26 run in 1 game.

T Westley will open the innings for ESS, He is must have player as he is very good player. He has scored 57 run in 2 game.

V Chopra has been inconsistent but has experience and can be crucial if plays.

T Westley always performs for ESS and ENG-A. He has ability to score big with good strike rate. He has scored 57 run in 2 game.

R Ten Doeschte if plays will be cruicial but his recent form is not great but he is very experienced player has played in IPL for KKR. He has scored 29 run in 2 game.

M Labuschange has been most improved t20 players in last 1 year and also bowling 2-3 overs. He has scored 93 run in 1 game and also picked up 1 wicket.

C Ingram is t20 specialist plays all over world in t20 leagues and batting 2 down. He has scored 1 run in 1 game.

J Neesham NZ allrounder is signed by ESS this season. Hw will be very important plays as he will bowl 2-3 over and bat 3 down. He has scored 71 run in 2 game and also picked up 1 wicket.

S Harmer will bowl spin and has ability to pick wickets in bunch and will bat 5-6 down. He has scored 28 run in 2 game and also picked up 3 wicket.

D Douthwaite is bowling allrounder for GLA and has ability to pick wickets. He has picked up 3 wicket in 1 game.

D Llyod will open inning and is good player but lack consistency. He has scored 28 run in 1 game.

T Vander and R Smith are main bowlers for GLA. T Van is wicket taker and death over specialist.

P Sisodiya is main spinner for side and has good past record.

J Poarter and S Cook will be important bowler for ESS, J Plom and A Nijjar will assist them. S Cook has picked up 5 wicket in 2 game. 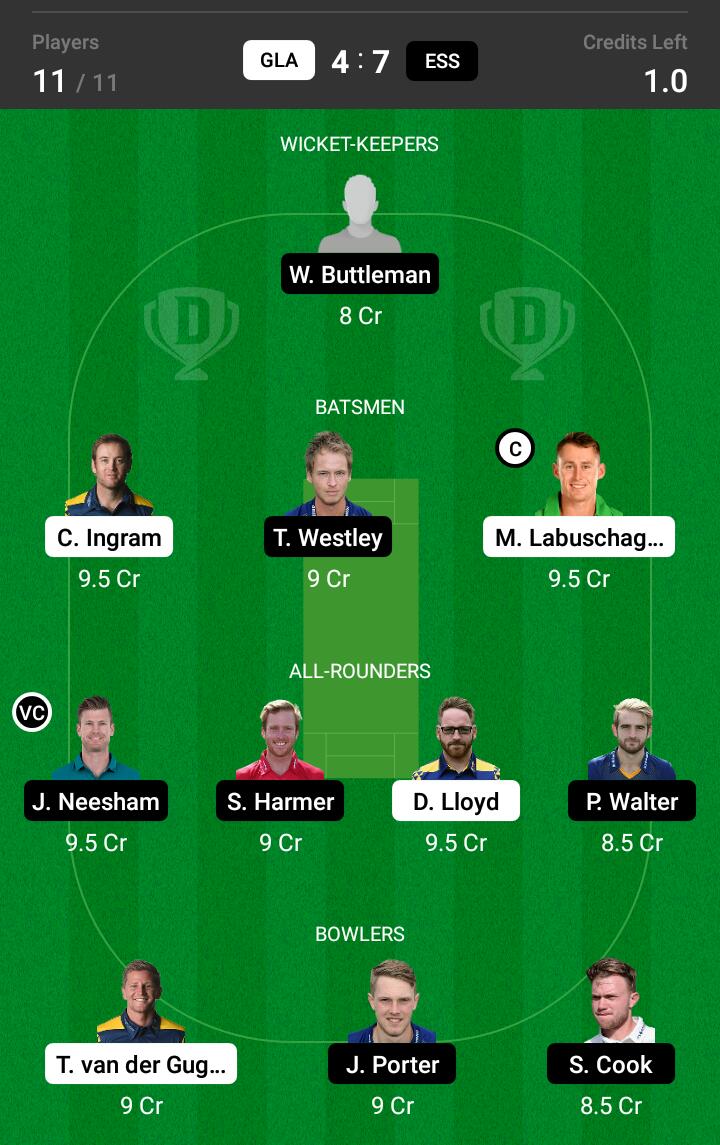