Galle Gladiators vs Dambulla Vikings, The 17th match will be played in Hambantota on 9 December 2020 at 8:00 PM.

Since the last 2 games, he’s been looking in good touch and has been high on confidence. Although the last game was washed out, he is striking the ball well.

He has been evolving throughout this season and has been batting really well. He’s a safe pick and can be tried in GG vs DV small league teams.

Due to his batting order, he’s not getting too many deliveries to play, nor has he been in a good form ever since the CPL. He is a hit or miss player, and can give points on the field more than with the bat.

He just played one game this season which was also washed out. He’d be opening and has been good with the bat in general. Can keep in GG vs DV dream11 GL.

By far the safest and the best choice for your teams. Has notched up 30+ runs in every game and is looking in great consistent touch with the bat and can also bowl when needed.

Has looked in fine form with the bat and it’s this opening stand which has been vital for the Gladiators especially in their previous win. He is striking the ball really well and is a good pick for GG vs DV dream11 team.

Finally got back in touch in the previous game and will get back to his groove as his confidence has come back. He’s the current skipper of the side as well and can be a good pick as he’s taking the ball for a couple of overs too.

If he continues at No.3, he’s surely a must pick. His batting order has constantly changed depending on when one of the openers depart. He is a good player but is a risky pick due to the uncertainty in his batting position.

Has been giving 40+ points consistently in every game and is high on confidence and morale with the bat. He’s promoting himself up the order depending on the situation and is a must pick in your GG vs DV dream11 teams.

He started the tournament with some blistering performances but has gone haywire a bit. He’d give 25 sure points and is a safe pick nonetheless.

Has looked good with the ball in each game but was unable to register wickets, and in the previous game showed what his worth with the ball is. He is a justified pick for GG vs DV small league.

He has been giving consistent points with at least 1 wicket in every game he’s played. Can be a good pick for GL and a safe 25 points if you keep him in SL.

The wickets have been helping spinners now as the tournament has gone on, and he has proven his worth with the ball as well. A crucial pick.

Been picking up atleast 1 wicket in every game and even though has been expensive, has given safe 25 points. Must pick in GL, can drop in GG vs DV dream11 SL due to abundance of options.

Has been the best bowler for this team and has been giving crucial runs with the bat down the order as a finisher too. A very safe pick and a must pick for SL.

The wickets are helping spinners and he has looked good with the ball throughout the course of the season. He can be a crucial GL pick.

Danushka Gunathalika and Dasun Shanaka are by far the safest options for GG vs DV dream11 C/VC in Small Leagues. Another safe option could be Samit Patel.

Angelo Perera, Anwar Ali, Niroshan Dickwella and Azam Khan are risky but consistent point getters and can be tried as GG vs DV dream11 VC picks with the C choice being one of the Small League choices. 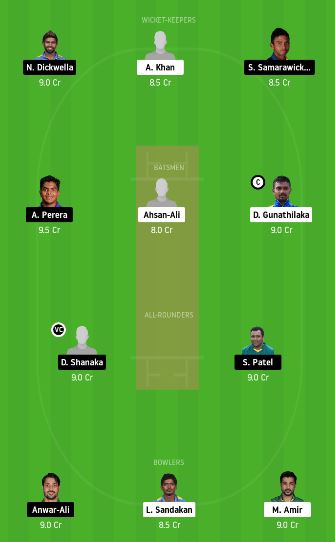