There’s a lot to take into consideration when you’re looking for the best ESS vs SUS dream11 team. Today, We are going to discuss ESS vs SUS 31st Match news, ESS vs SUS fantasy Cricket prediction, and dream11 Expert data. This League is called English T20 Blast 2021 in the dream11 app.

Essex lost last game against GLO by 7 wickets. They have played 3 game won 1 while loosing 2.

Sussex is a strong side they won they have plated 2 games won both games. They won last game by 9 wickets against HAM.

A Wheater will keep for ESS. He is not consistant with bat. He is expected to bat 4 down some games he has also played 1 down. Wheater has scored 2 run in 1 game. He did not play last game.

M Pepper will bat 1 down. He is inexperienced has only played lower level cricket. He has scored 47 runs in 3 game.

W Buttleman will open and keep for his side but not consistant with bat. He has scored 38 runs in last 2 games.

P Salt will open inning and is also good player very experienced and very good batsman. He plays all around world in various t20 leagues. He has scored 149 runs in last 2 games.

T Westley will open the innings for ESS, He is must have player as he is very good player. He has scored 64 run in 3 game.

V Chopra has been inconsistent but has experience and can be crucial if plays.

R Ten Doeschte if plays will be cruicial but his recent form is not great but he is very experienced player has played in IPL for KKR. He has scored 29 run in 2 game. He did not play last game.

L Wright a powerful left-hander very attaking player must have player also bowl some time has been in good form but he did not play last game.

T Head will bat at one down and is good player, play very attacking cricket can score big. He has experience of these pitches playing for AUS. He has scored 25 runs in last 2 games.

D Rawlins is proper batsman if early wkt falls can be crucial also bowl but his form is big concern. He has scored 9 runs in last 2 games.

S Van Zyl is the player who relies on timing and has represented SA in international cricket.

J Neesham NZ allrounder is signed by ESS this season. Hw will be very important plays as he will bowl 2-3 over and bat 3 down. He has scored 92 run in 3 game and also picked up 1 wicket.

S Harmer will bowl spin and has ability to pick wickets in bunch and will bat 5-6 down. He has scored 46 run in 3 game and also picked up 4 wicket.

D Wiese always play good inning down the order, and bowl 2-3 over of medium pace. He has scored 11 runs in last 2 game and picked 1 wicket.

R Bopara is very experienced player has been consistent in domestic circuit but looked poor last series and in 1st game but came back to form scoring 56 run last game.

G Gartoon is very good death bowler and has ability to pick wickets in bunch. He has scored 46 run in last 2 games and took 5 wickets.

J Porter and S Cook will be important bowler for ESS, J Plom and A Nijjar will assist them. S Cook has picked up 6 wicket in 3 game. 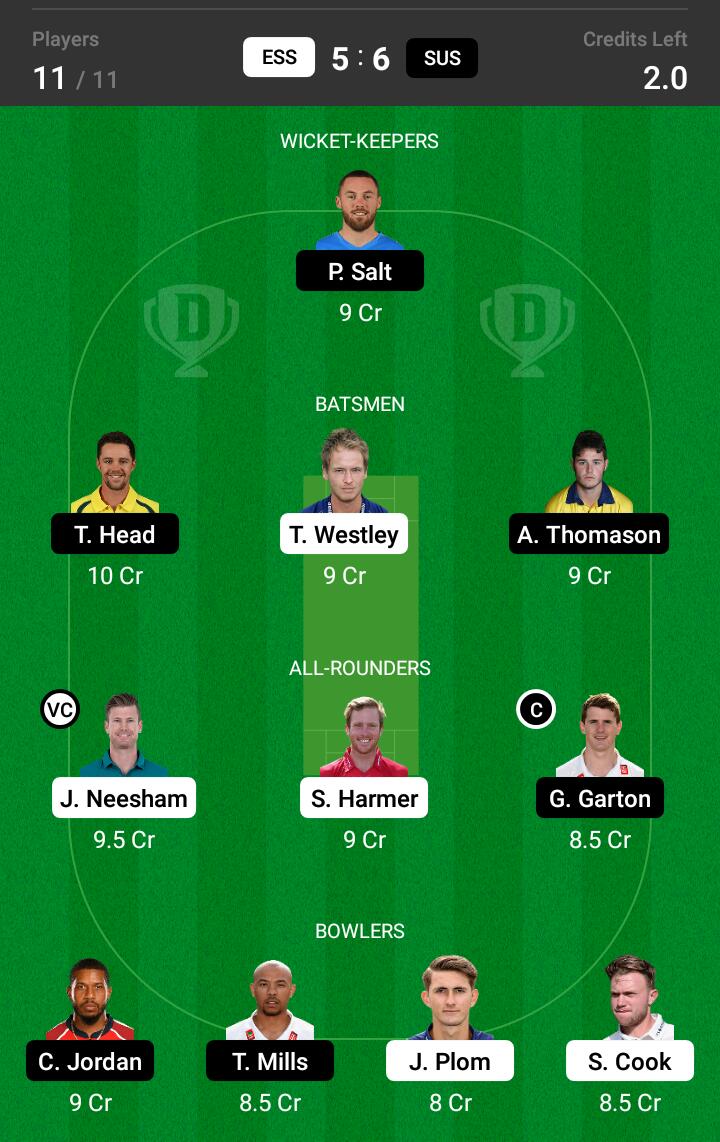