There’s a lot to take into consideration when you’re looking for the best ENG vs NZ dream11 team. Today, We are going to discuss ENG vs NZ 3rd Test Match news, ENG vs NZ fantasy Cricket prediction, and Expert data. This League is called New Zealand tour of England 2022 in the dream11 app.

New Zealand has been very good test side and will be favourite to win but lost there 1st two games.

T Blundel will bat in middle order for NZ. Blundel a very hard hitting batsman has started his test career with good scores but has been inconsistent. He has scored 240 run in last 2 game.

J Bairstow has not been consistent in test cricket as he is in other format but was brilliant in last game. He has scored 161 runs in last 2 game.

B Foakes for England in this format and expected to bat 4 down. He has been superb red ball player and will look to cement his spot.

T Latham will open the innings for NZ. , Latham has been in brilliant form and has been very consistent. He has 40+ average for NZ as opener which is great. He has scored 45 run in last 2 game.

D Conway who has been in very good form with 50+ average in FC and has been consistent in whatever games he has played came back after long injury but showed same form. He has scored 112 run in last game.

W Young will bat at top order and has been best at top order for NZ. He was superb in India series and will look to perform in this version also which suits him more. He has scored 105 run in last 2 game.

H Nicholls will handle the middle-order batting. Nicholls has been reliable man for them whenever top order collapse

Z Crawley and A Lees will open the innings for Eng. Burns has been dropped and replaced by A Lees who is expected to debut and is coming back after brilliant practice gamee while Z Crawley has also looked in much better form.

J Root, J Bairstow will handle the middle-order batting. J Root will lead side, their best player and has been in superb form and will look to show he belongs to top 4 in INT Cricket, J Root Has scored 305 runs in last 2 game.

M Haq will hold middle order. He has been exceptional for BAN in this format and will also lead side. He has scored 101 run in last game.

M Hasan Miraz is spinning allrounder who bat 5 down and is wicket taking spinner. He has scored 47 runs and picked 4 wickets in last game

R Ravindra and D Mitchel were fighting for number 7 position both are same type of player but D Mitchell has been best player this series. D Mitchel scored 363 runs in last 2 games.

B Stokes, C Overton are Allrounder of England. B Stokes has been in not in hot form but can provide points through bat and ball.

T Southee, T Boult and N Wagner and are the paceman for them, K Jameison will assist them Wagner has been pick of the bowler for them last series while Southee is also in very good form.

S Broad and J Anderson who have been pick of the bowler for them since last 7-8 years whiles M Potts who will look to impress in this oppurtunity, J Leach if play will handle spin department and will bat 6-7 down. 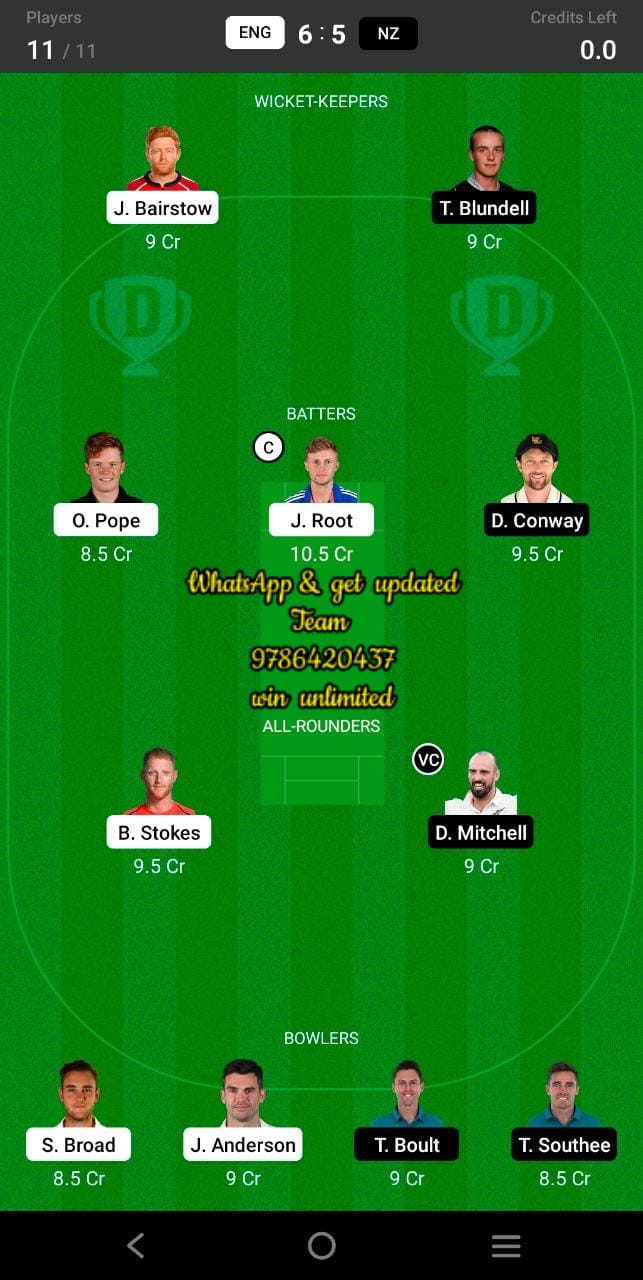