There’s a lot to take into consideration when you’re looking for the best DUR vs YOR dream11 team. Today, We are going to discuss DUR vs YOR 12th Match news, DUR vs YOR fantasy Cricket prediction, and dream11 Expert data. This League is called English T20 Blast 2021 in the dream11 app.

Yorkshire is a very strong side they reigned supreme in 2019 but missed trophy in 2020 they were not consistent won only 3 games and lost 5 games.

J Bairstow will open inning and is very good player, is a very skilful player, will look to contribute some runs before joining England camp. He scored 34 run 1st game.

A Lyth, T Kohle are important players for for YOR. A Lyth is a stalwart of the County game who open the batting for his side and great hitter of bowl.

Kohle is also good player has not done anything last season but after that he has been in very good form. This season he is batting 2 down.

D Malan has been in superb form for Eng in domestic cricket and also number 1 T20 international player in ICC rankings. He scored 23 run 1st game.

H Brook is a key all-rounder and a massive hitter if he gets his eye in, also bowls some handy medium pace

A Lees, B Raine will open the innings for DUR, A Lees a powerful left-hander very attacking player must have player.

G Clark will bat at one down and is good player, play very attacking cricket can score big.

D Willey will most probably open and also bowl 2 0vers in start and 2 at death so good captain choice. He picked 2 wicket 1st game.

B Stokes whenever plays will be direct captain choice as he will bat in top3 and bowl 4 overs.

D Oliver, L Ferguson will be the opening bowler for them, D Olivier has good domestic record and very experienced bowler for them but did not play last game.

L Ferguson is best sign for them this season he has raw pace and known for picking wickets. He picked 1 wicket 1st game.

S Patterson and A Rashid are there spinner known for always chipping with wickets.

M Potts, B Carse are the opening bowler for them will also bowl in death so high chance of picking wickets, Carse also very good allrounder, L Trevaskis, P Coughlin will support them, both looked promising.

Vice-Captain Choice: A Lyth, A Rashid 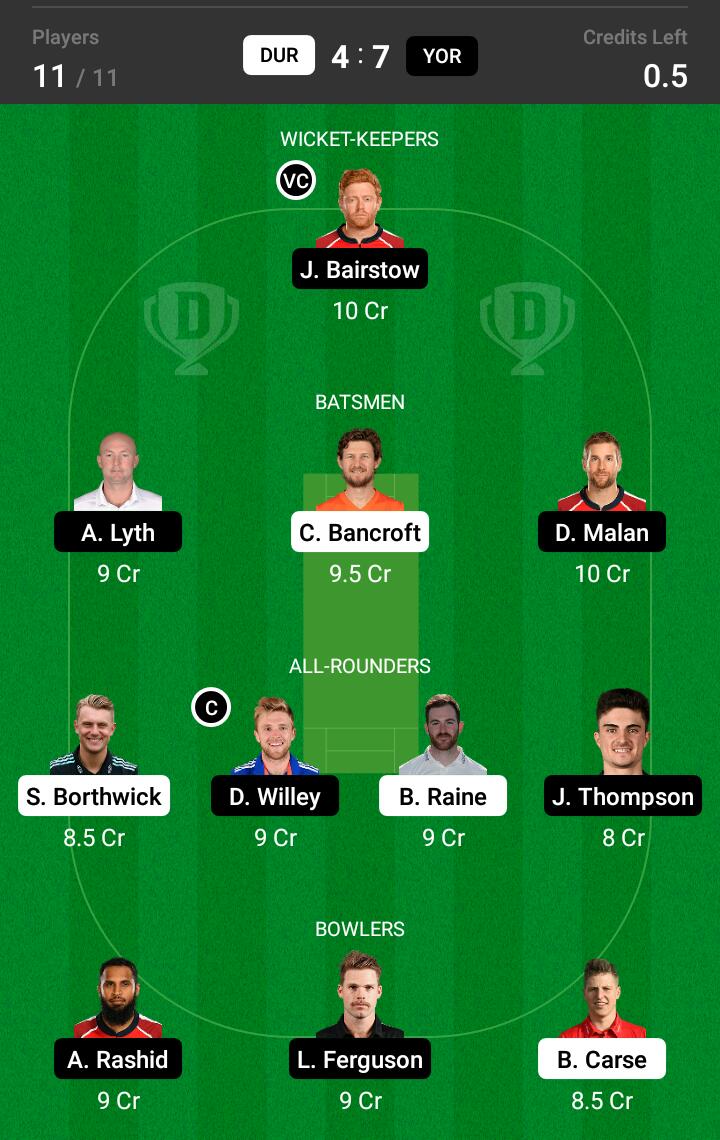