There’s a lot to take into consideration when you’re looking for the best DUR vs ESS dream11 team. Today, We are going to discuss DUR vs ESS 59th Match news, DUR vs ESS fantasy Cricket prediction, and dream11 Expert data. This League is called English One-Day Cup 2021 in the dream11 app.

Durham played 5 games won 3 while losing 1 but and are good side.

Essex played 5 games won 4 while losing 1 and are at top of point table.

A Wheater will keep for ESS. He is not consistant with bat. A Wheater is expected to bat 4 down some games he has also played 1 down. He has scored 103 run in 5 game.

C Bancroft is new signing by DUR he mostly bats in top order can also keep wicket but here batting in middle order. He also lead side. He has scored 94 runs in last 5 games.

T Westley will open the innings for ESS, He is must have player as he is very good player. He has scored 310 run in 5 game.

M Pepper has been inconsistent but has experience and can be crucial if plays. He has scored 40 run in 5 game.

R Ten Doeschte if plays will be cruicial but his recent form is not great but he is very experienced player has played in IPL for KKR. He has scored 33 run and picked up 7 wickets in 5 game.

Sir Alastair Cook is legend in England and has een in good form. He has scored 220 runs in last 5 games.

G Clark will bat at one down and is good player, play very attacking cricket can score big. He has scored 377 runs in 4 games.

S Dickson plays good inning down the order and has been in good form. He has scored 168 runs in 4 games.

D Bedingham will open inning and is very good player, is a very skilful player, will look to contribute some runs . He has scored 168 runs in last 3 games.

S Harmer will bowl spin and has ability to pick wickets in bunch and will bat 5-6 down. He has scored 41 run in 5 game and also picked up 10 wicket.

L Doneathy is batting 2-3 down this season and bowling in death over so must gave players and good captain choice. He has scored 119 runs and picked 6 wickets in 3 games.

A Nijjar and S Snater will be important bowler for ESS, B Allison will assist them. S Snater has picked up 13 wicket in 5 game.

P Van and C Rusworth are the opening bowler for them will also bowl in death so high chance of picking wickets, S Borthwick is wicket taker spinner also very good allrounder, L Trevaskis, M Salisbury will support them, both looked promising. 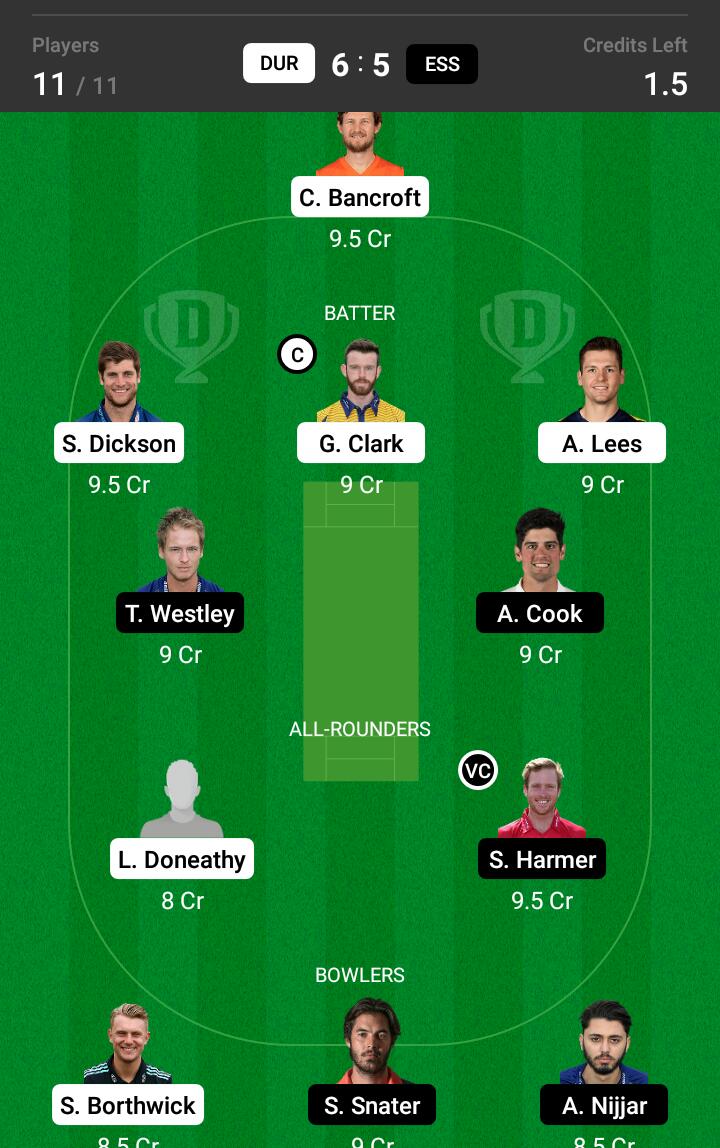