There’s a lot to take into consideration when you’re looking for the best DUB vs SHA dream11 team. Today, We are going to discuss DUB vs SHA 30th Match news, DUB vs SHA playing 11, DUB vs SHA fantasy cricket prediction, and dream11 Expert data. The Big Bash League is called Dream11 Emirates D20 2020-21 in dream11 leagues.

He can be a good pick. Has scored 4 20+ scores in the last 5 games. Can be a safe point giver and a good pick for your DUB vs SHA dream11 team.

Safe choice for your teams. Has been consistently getting runs and has got good points in every game either with the bat or from behind the stumps.

After 5 consecutive matches where he didn’t play, he finally replaced Punya Mehra in the previous game making it possible to keep 3 batsmen in the team who would play the game. There isn’t a 4th viable option hence making him a must pick for DUB vs SHA today match.

He is a consistent batsman and has given more than 30 points in 4 of the last 5 occasions and is a must pick and a safe pick for your teams.

Has been batting well and can be tried in risky SL or GL teams. Giving good points in every game. Can also be a credit saver pick in GL.

He has picked up atleast 30 points in each of the last 5 games and can be a really safe pick and is high on confidence. Good pick for your DUB vs SHA dream11 team.

A worthy GL pick and if you manage credits anyhow, he is a safe pick for the Small League Teams too. He has been batting well and also getting a wicket to his name as an added bonus. Good All Round performance in almost every game.

He is a safe pick and a consistent wicket taker too. He is a must pick for your DUB vs SHA teams from this section.

As there are just three viable options in the bowling department, he is a must pick for your teams.

Kashif Daud and Umair Ali are by far the best and the safest options to choose as C/VC and have been selected by majority users as the same, making them the perfect choices for DUB vs SHA dream11 SL teams.

Khalid Shah, Ali Naseer and Adnaan Khan could be tried in GL teams as C/VC, other than the two mentioned above. Muhammad Hassan could also be tried as a Hit/Miss player for GL teams. 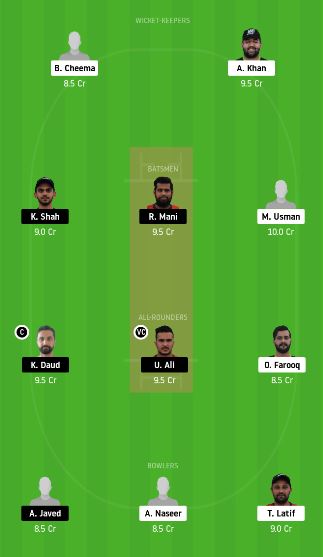 If you are like our DUB vs SHA dream11 prediction. Please share this article with your friends, who are playing dream11 fantasy leagues. Don’t forget to follow us onTwitter, Telegram, and Youtube for the best dream11 tips and tricks.