There’s a lot to take into consideration when you’re looking for the best DUB vs EMB dream11 team. Today, We are going to discuss DUB vs EMB 17th Match news, DUB vs EMB fantasy Cricket prediction, and Expert data. This League is called Emirates D20 2022 in the dream11 app.

Dubai has been very inconsistent side in past and this year also looking weak. They have lost 5 games from 5 games played.

Emirates Blues has been average side and has won 2 games and lost 2 games from 4 games they have played.

S Sethi bat in top order but has been inconsistent performer. He has scored 24 runs in last 5 games.

Try A Ur Rehman in gl teams as he is hit or miss type player. He has scored 51 runs in last 3 game.

A Sharafu has been best for EMB side. He is experienced and International player. He has scored 164 runs in last 4 game.

R Panoly bat in top order and is very good player. He has been consistent domestic performer. He has scored 105 runs in last 5 game.

R Shahzad has been inconsistent but good player to try in your team and can score big if he get set. He can also bowl few overs.

A Lakara is most important player for EMB and his side rely on him. He will bowl 3-4 over of spin and is also very good batsman. He has scored 28 runs and picked up 3 wickets in last 4 game.

N Kesarwani has been providing points through both department but is basically a bowling allrounder. He has scored 17 runs and picked up 3 wickets in last 4 game.

H Seth is bowling allrounder who can also bat whenever needed. He pick wickets in bunch. He has picked up 2 wickets in last 4 games.

F Momand has knack of picking wickets and can also score quick 20. He has scored 27 run and picked up 1 wicket in last 4 game.

S Rao, A Shetty are best bowler from EMB side and will be assisted by K Meiyappan. K Meiyappan pick atleast 1 wicket every game. A Shetty has picked up 6 wickets in last 3 games.

H Seth and F Momand are best bowler from DUB, picking 2+ wickets every game. H Seth has picked 2 wicket in last 2 games. A Sangwan will assist them.

Captain Choice: A Lakara, A Sharafu 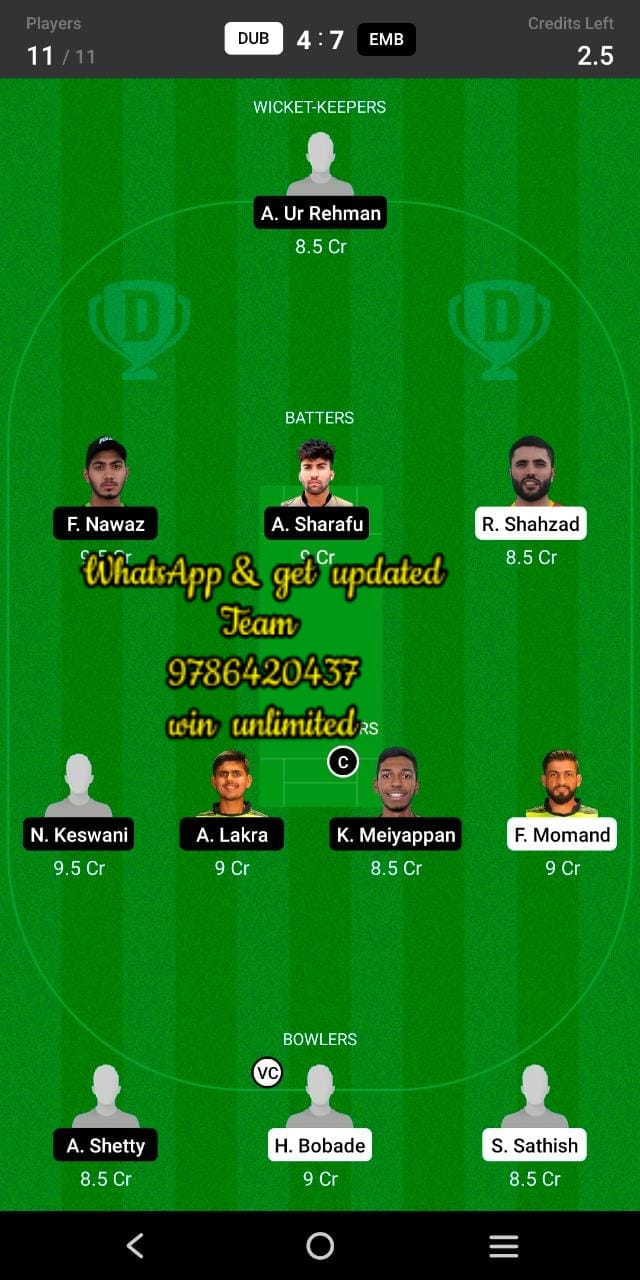