There’s a lot to take into consideration when you’re looking for the best DC vs BLR dream11 team. Today, We are going to discuss DC vs BLR 22nd Match news, DC vs BLR fantasy Cricket prediction, and dream11 Expert data. This League is called Indian Premier League 2021 in the dream11 app.

Delhi Capitals vs Royal Challengers Bangalore, The 22nd match will be played in Narendra Modi Stadium, Ahmedabad on 27 April 2021 at 7:30 PM.

Delhi Capitals is a very strong side and are contender to win trophy and go 1 step further then last year. They won there 1st game comfortably against CSK, lost 2nd game against RR in last over but won 3rd and 4th game with good margin.

Royal Challengers Bangalore has been only side winning 4 games. They are looking most balanced side this year.

AB De Villiers form was matter of concern, as he was playing after long time, but he looked in prime touch and scoring every game. He is very dangerous player will also provide keeping points. He is expected to bat 3 down.

Rishabh Pant will lead the side this season and will get the most points in wicket-keeping. Pant will try to hit more sixes. He has improved a lot since last 6 month scored brilliant half century 1st game.

Shikhar Dhawan will try to hit more fours. So, his thunder shots will bring quick runs. He also plays a very crucial role in fielding. Dhawan looked compact and in very good form in all game. He scored 92 2nd last game.

Prithvi Shaw’s last IPL season was not good. Most of the matches dismissed below 20 runs. He is coming back after superb syed mustaq ali. He looked in prime touch in 1st game but got out early last 2 game.

A Rahane is technically very solid. He will look for very good this season so that he can cement his place in National side for shorter version. He failed 2nd game so S Smith replaced him and he batted well last game.

Rajat Patidar batsman from MP who has impressed in practice matches scoring 1 hundred and 1 half century can play 1 down.

C Woakes expected to finish inning for DC and will bowl 4 over every match, He is coming with great international form. He has been picking wickets in powerplay. He missed last game.

G Maxwell is coming with lot of expectation, he batted 2 down and can also bowl few over of off spin as Chenai pitch will suit his bowling. He is very dangerous player and showed maxi touch in 1st two game. He got MOM in 2nd game for his half century.

Daniel Christian if play will finish inning for RCB and will bowl 2-3 over every match, He is coming with great BBL form.

A Mishra, A Khan will strengthen the bowling unit. A Khan was exceptional in both matches bowl with good variation and raw pace. A Mishra took 4 wicket last game and has been best spinner in IPL.

Kagiso Rabada and C Woakes will take maximum wickets. So, don’t miss both of them in your dream11 team. They are also good wicket taker. C Woakes is also handy batsman down the order but he missed last game.

K Jamieson and Harshal both are wicket taking bowler, but can also go for runs in death overs.

Harshal Patel took 5 wickets in 1st game and 2 wicket in 2nd game and picking wickets every game so crucial player as bowling in death. He is purple cap winner at the moment.

Y Chahal will try to pick at least 2 wickets very good spinner. Chennai pitch will favour him so can be tried as Captain VC in Gls. He failed 1st two match but got wicket in 3rd game. 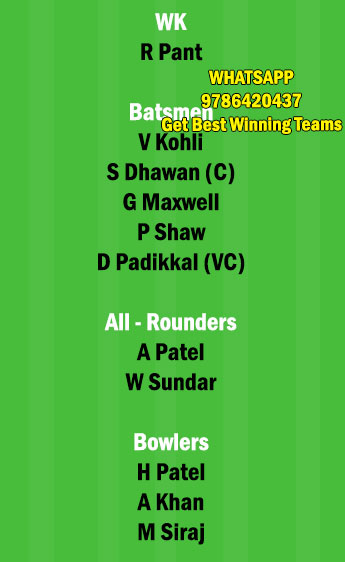