There’s a lot to take into consideration when you’re looking for the best BRG vs PSV dream11 team. Today, We are going to discuss BRG vs PSV 39th Match news, BRG vs PSV fantasy Cricket prediction, and dream11 Expert data. This League is called Fancode ECS T10 Prague 2021 in the dream11 app.

Brno Rangers vs Prague Spartans Vanguards, The 39th match will be played in Vinor Cricket Ground on 13 May 2021 at 4:30 PM.

Brno Rangers is a very strong side and has best bowling lineup. They have played 6 game winning all 6 and are contender to win this series.

Prague Spartans Vanguards won last game against UCC by 34 runs, they have won4 loose1 while 1 game got tied.

S Bhatia mostly bat 1 down and is very good player but his position not fix. He has scored 84 run in 6 game.

Try S Mitra in your gl team, He is batting 1 down. He will provide keeping points. He is not consistant with bat.

S Hoffman bats 2 down mostly, has scored 63 runs in 6 game. He was opening last year and has good record but this year he is mostly batting in middle order.

D Steyn and A Bhuiyan must have from this section.

D Steyn has scored 173 runs in 46games and has good record. He is also leading BRG.

A Bhuiyan will probably bat 3 down and bowl 2 overs. He has picked 5 wicket and score 24 run in 4 games.

K Venkatswamy is batting 1 down and looked best batsman form PSV side scoring 160 runs in 6 game.

A Kashif is openning inning and bowling 1-2 overs. He can be tried as captain.

For other batsman K Venkatswamy, A Kashif can be tried these are good player.

R Ali will bat 2 down and bowl 2 over so good captain choice. He has picked 4 wicket and bowled 2 overs all games also scoring 37 runs.

S Sengupta will open and bowl 2 over so good captain vc choice. He has scored 131 runs and picked 7 wicket in 6 games.

N Tyagi is cruicial from PSV side as he bat in top 4 and bowling 2 overs. He has scored 75 runs and pick 5 wickets in 5 games.

T Lal is must have from this department, will bowl 2 overs in middle can pick 1-2 wickets. He has picked 2 wicket in 4 games but can also sent as hitter in top order.

Try S Tiwari in your teams. He will be opening bowler for side. He is brilliant bowler has picked 1 wickets in 4 games but bowling very economically.

N Ahmad, S Basu must try bowler as they are bowling in middle and has good domestic record. 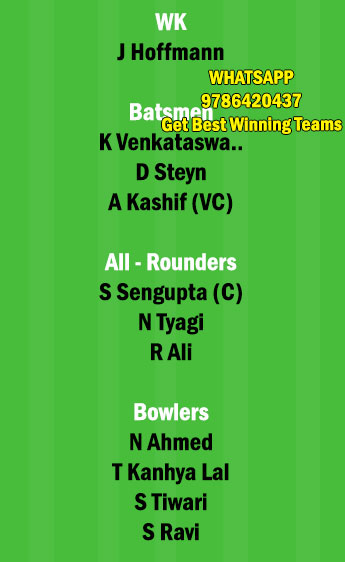