There’s a lot to take into consideration when you’re looking for the best BRD vs GUJ dream11 team. Today, We are going to discuss BRD vs GUJ Match news, BRD vs GUJ playing 11, BRD vs GUJ fantasy cricket prediction, and dream11 Expert data. This called Syed Mushtaq Ali Trophy 2021 in dream11 leagues.

He had a good outing in the first game but has been dropped the batting order now and can be a GL pick for your teams if at all.

He is a consistent run getter and has done well for Baroda over the years and can be a worthy try for both SL and GL teams.

He has been giving good starts as an opener for the team, but needs to convert them to a good score. He can be a worthy pick for both SL and GL teams.

He is a good batsman and is a worthy try for GL teams. He is an opener, a hit or miss player and can do well. Can pick in SL.

He is batting in the middle order and also being used as a bowler to bowl a couple of overs. He could be a worthy pick for GL or risky SL teams.

He was sent down the order in the previous game but had a good knock and can be sent up the order again. Can be picked in SL teams, and is a worthy try for GL nonetheless.

He has been giving good starts and has looked good with the bat and is also batting above Ripal Patel in the order. Still, choose either one between them in SL.

Patel has had both knocks really good and crucial for the team on both occasions. He can be a safe choice for your teams and is high on morale right now. He bats below Urvil Patel and hence the choice is between them to choose one for your teams.

He just played one game this season and ended up with a good spell to his name. He could be a punt pick for your teams and a worthy try for GL.

He is safe choice for your teams. He’s the skipper of this side and an experienced all rounder. He can contribute with both bat and ball and is a consistent point getter for your teams.

A consistent point getter left-arm seamer and has taken a wicket in both games this season. He can even get some runs down the order with the bat if needed. He can be a good try for SL and a must pick in GL nonetheless.

He is a safe choice for your teams from this team and is the best bowler of the side and also a good hitter of the ball too.

Meriwala is a good bowler and is a worthy GL pick. He has done well over the years and can get crucial wickets. He is a safe choice for your teams looking at his performances.

He can be left out from your teams. He isn’t bowling his entire spell of 4 overs irrespective of how he performs and batting lower down the order. With the numerous available options to keep in the team, he could be avoided, but can try in GL if bowling first.

Quite a few worthy tries from the two teams makes it difficult to keep him in your teams as he has just played one game yet and went wicketless although has been economical. Can rotate between bowlers of Baroda in GL and can even leave him out if needed.

He either contributed with the bat or the ball but can do both ways and is an experienced and a safe choice for your teams.

Hit or miss pick from the bowling section. Can be a good pick for GL surely. Can leave out from SL due to the number of available options.

He is the safest choice to be kept in your teams. He is a consistent wicket taker and even though went wicketless in the previous 5-over contest, he’s a must pick from this section.

He was sent up the order to give a quickfire cameo in the previous games and can be sent again. He hasn’t taken too many wickets as such and is a worthy try for GL.

Kedar Devdhar and Axar Patel are the most selected choices as C/VC making them the safest choices to keep as the same for SL teams.

Other safe choices solely on the basis of performances could be Arzan Nagwaswalla, Piyush Chawla, Ninad Rathwa and Krunal Pandya (if he does play)

Vishnu Solanki, Atit Sheth, Lukman Meriwala, Ripal Patel and Roosh Kalaria can be tried as C/VC in GL teams. They are good performers in their respective roles and can do well. 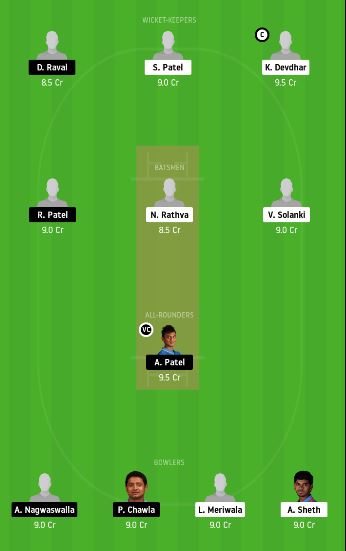 If you are like our BRD vs GUJ dream11 prediction. Please share this article with your friends, who are playing dream11 fantasy leagues. Don’t forget to follow us onTwitter, Telegram, and Youtube for the best dream11 tips and tricks.