There’s a lot to take into consideration when you’re looking for the best BAR vs ANA dream11 team. Today, We are going to discuss BAR vs ANA Match news, BAR vs ANA fantasy Basketball prediction, and dream11 Expert data. This League is called EuroLeague 2020-21 in the dream11 app.

The Turkish Airlines EuroLeague Championship Game will pit FC Barcelona against Anadolu Efes Istanbul. Barcelona returns to play the final game of the season for the first time since 2010. It will be the third time this century Barcelona plays in the EuroLeague final, having won on both previous occasions in 2003 and 2010.

Efes will play in consecutive EuroLeague championship games after having never reached one before 2019 as it aims for its first EuroLeague crown. After two semifinal thrillers that were decided by a combined margin of 5 points, Barcelona and Efes will give it all for the EuroLeague crown at Lanxess Arena in Cologne, Germany.

Barcelona arrives at the championship game with the league’s best defense, which allowed 73.2 points per game this season. Against Efes’s multiple backcourt threats, Barcelona will need to be aggressive and physical on the perimeter and use pressure to try to prevent the likes of Micic and Larkin from getting hot, and make them uncomfortable.

Offensively, Barcelona will certainly look to slow down the tempo whether it will have Nick Calathes available to play or not while using the size end experience of Nikola Mirotic, Brandon Davies and Pau Gasol to do damage inside and help Barcelona win the title.

Every basketball fan by now knows that Efes’s strength is in its backcourt. It starts with the duo of Larkin and Micic, but is complemented by fellow guards Krunoslav Simon and Rodrigue Beaubois. This quartet combined to score 61 of the team’s 89 points in the semifinals and dished 11 of Efes’s 12 assists on Friday. Efes found solutions against Barcelona’s defense in their earlier meeting this season, but to keep Efes’s offense rolling once again on Sunday, these four perimeter players will need to be scoring and dealing and on top of their games. 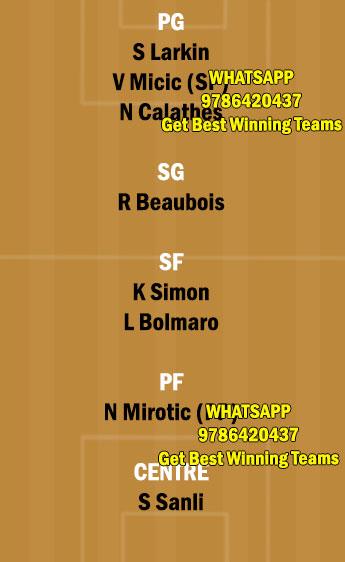