There’s a lot to take into consideration when you’re looking for the best AUS vs IND dream11 team. Today, We are going to discuss AUS vs IND 4th Test Match news, AUS vs IND playing 11, AUS vs IND fantasy cricket prediction, and dream11 Expert data. This League called India tour of Australia 2021 in dream11 leagues.

He has been good on Australian wickets and with Saha failing with continuous low scores, Pant could take this opportunity and do well with the bat. Worthy try in GL.

Got the man of the match award in the previous game and was the highest individual scorer for the Aussies in the previous test match. He is the safer option amongst the three keepers due to the selection percentage as well, but bats way down the order. Can try Wade/Pant in risky SL.

Worthy try for GL teams and could be a good pick for your teams. Can do well with the bat. He is a middle order batsman currently with Harris opening.

Under scrutiny due to being the most experienced players but failing miserably continuously. He would ideally like to show his worth with the bat out here. He could be a safe pick.

Rahane scrutiny due to being the most experienced players but failing miserably continuously. He is also the captain of the team now in the absence of Virat. He would ideally like to show his worth with the bat out here. Rahane could be a safe pick.

Didn’t do much in the previous game, but is still the safest batsmen from the Australian team for you to keep in your teams.

He is a great test batsman and is a difficult batsman to dislodge and ends up with good runs to his name. He is a safe pick when it comes to this format of the game.

He is a highly experienced batsman and although his comeback from the injury wasn’t too good with the bat, a long innings is on the cards for him any time soon. Good pick for both SL and GL.

He would be playing his first game in this series and is a worthy pick for GL especially against a second strength Indian bowling attack.

Would’ve ideally preferred a better International debut after scoring a century in the first warm up match against India A, but didn’t do much with the bat or ball. He can be tried in GL nonetheless, as he did show his quality with both on this tour itself.

Undoubtedly the safest pick in this game and a must pick. Always picks up wickets and can also give crucial runs with the bat in the lower order.

He is one of the best spinners in this format of the game from all around the world and surely he’d do well with the ball and can pick up wickets if the seamers don’t create the havoc. Brisbane wickets are well suited for seamers so he could even be avoided from your teams if at all.

He is one of the best bowlers in the world and has sheer pace along with accuracy and does utilise the initial new ball swing really well too. He is a safe pick but might have to choose one between him or Cummins in SL. Worthy pick in GL nonetheless.

The choice for your SL teams could be between him and Starc. He did create havoc in the previous innings where his figures were 5/8 in just 5 overs, but that usually happens once in a rarity and may not happen again so try him in risky SL and GL surely, can prefer Starc in safe SL teams.

If he does replace the injured Shami instead of Saini, he could be a good choice. He would dedicate this performance to his father and would love to do well with the ball. Do try him in GL.

He had a good debut game in the previous encounter and can be a good wicket taking bowler on these pace-friendly Brisbane wickets. He would be leading the attack with Siraj in the absence of Bumrah.

He had a good T20I debut and a good ODI debut. Now he would look for a good Test debut. He can be a good pick for both SL and GL teams if he does feature in the XI.

He has just bowled 10 deliveries in his entire Test career till date and will get a go here due to the numerous injuries in the team. He can be a worthy pick for both SL and GL as he can give some crucial runs down the order just the way Jadeja does and can give points with both bat and ball.

The last time he played a test match was in January 2019 against the Aussies and ended up with a 5 wicket haul to his name in the only game that he played against them. He would be playing a test match after 2 years against the same team but on a pace-friendly wicket, he may or may not do as good as his previous performance. Worthy pick in GL as their front line bowlers at the start of the series are all out with an injury and he can do well.

Steven Smith, Marnus Labuschagne, Rohit Sharma and Ajinkya Rahane are safe choices to be tried as C/VC in SL teams.

Pat Cummins, David Warner, Cheteshwara Pujara and Rishabh Pant can be good prospective choices to be tried as C/VC in GL teams. 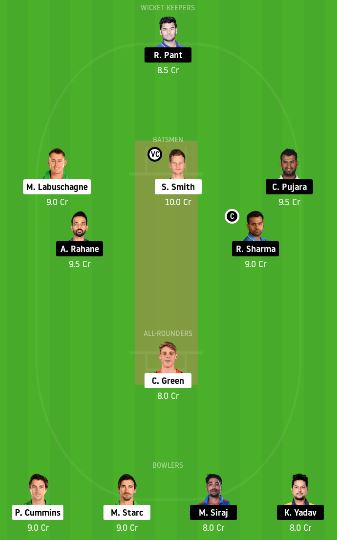 If you are like our AUS vs IND dream11 prediction. Please share this article with your friends, who are playing dream11 fantasy leagues. Don’t forget to follow us onTwitter, Telegram, and Youtube for the best dream11 tips and tricks.