There’s a lot to take into consideration when you’re looking for the best ATL vs LAL dream11 team. Today, We are going to discuss ATL vs LAL Match news, ATL vs LAL fantasy Basketball prediction, and dream11 Expert data. This League is called NBA 2020-21 in the dream11 app.

Atlanta Hawks vs Los Angeles Lakers, The match will be played in State Farm Arena on 2 February 2021 at 6:00 AM.

Lakers are one of the slow pace teams in this season. They won’t allow easily points to guard players. Young, Huerter are the best at their respective positions and credits but tough to sell against the Lakers team.

Capela is averaging more 0.25 fantasy point/ minute than previous season. He is the must in your roster. As usual Davis and James are the top picks for the game. But if it is a blowout game by Lakers means they are not the best at their respective credits.

Schroeder is proving himself the best in this season with Lakers. Lakers become more strong with the Schroeder and Harrell in the team. Gasol himself doesn’t project well till now as Harrell is eating his minutes and fantasy points. Harrell is the best late pick for any game. He can post easily 25-35 fantasy points. Hunter makes more sense from the Hawks team and he is posting minimum 25 fantasy points in his last 5 5 games. We can’t trust the remaining Hawks players.

According To Recent and h2h match stats, Lakers performed well and they can score a big outings against the weak frontcourt and backcourt Hawks. They are slightly dominating in stealing aspect in this seasons so far, So we have to pick best stealers from Lakers. Offensively And Defensively, Both are performing well and equal in this aspect in this season, So It’s better to select best forwards from both the teams.

4. According to the recent results, Lakers are performing better than the Hawks. 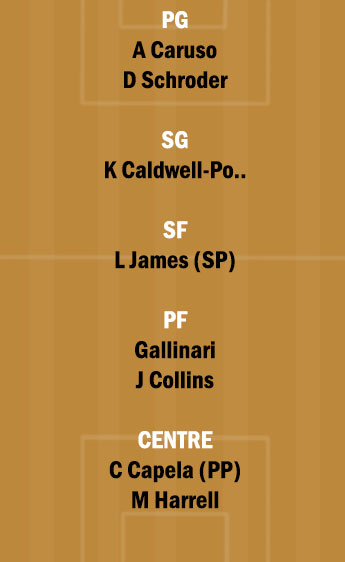