There’s a lot to take into consideration when you’re looking for the best ALZ vs HUD dream11 team. Today, We are going to discuss ALZ vs HUD 38th Match news, ALZ vs HUD fantasy Cricket prediction, and dream11 Expert data. This League is called FanCode ECS T10 – Sweden 2021 in the dream11 app.

Alby Zalmi CF had impressive run of domestic form in the T10 format but here in ECS They have lost 4 games and won 2 game from 6 games they have played.

Huddinge is also a good side has won 3 game while loosing 2 game from 6 games they have played.

I Zia will keep for ALZ and will bat 4-5 down so try only in gl teams.

A Rashid Khan will keep for HUD and will bat 1 down but his batting form is not good so try only in gl teams.

I Zuwak will open inning and is very attacking player but has been very inconsistent. He has scored 55 runs in last 3 games.

S Ali will open inning for ALZ and has been in good form. He also bowl few overs whenver needed. He has scored 43 runs in last 4 games also picking 2 wickets.

S Ahmad very good batsman and decent pacer, has picked up 3 wickets at an economy rate of just below 8. He has 46 runs and picking up 4 wickets in last 6 games.

Rahel Khan solid top order batsman and decent leg spinner, recently selected for the Swedish national team , picked up 7 wickets last year at an economy rate of just 5.87 and score 48 runs with the bat. He has scored 122 runs in last 6 games and picked up 9 wickets.

Z Alzoi bat in top order and bowl 2 overs and has been in superb touch. He has scored 124 runs in last 4 games and picked up 4 wickets.

Qudratullah Mir Afzalis a talented middle order batsman and can bowl at any time of the innings with good control. The all-rounder picked up SIX wickets at Dream11 European Cricket Series Stockholm 2020. He has scored 58 runs in last 6 games and picked up 2 wicket.

Tas Qureshi is another reliable all-rounder in the ALZ squad. He played for PF last season scoring 75 runs and picking up three wickets. One of the fastest bowlers in Sweden and can be a handy batsman in the middle order. He has scored 9 runs in last 4 games and picked up 4 wickets.

S Rahmani is a talented middle order batsman and can bowl at any time of the innings with good control. The all-rounder has picked up 2 wickets in last 5 games.

W Jalali is another reliable all-rounder in the HUD squad. One of the fastest bowlers in Sweden and can be a handy batsman in the middle order.

Sami Khalil considered the best all-rounder in the ALZ side, the 17-year old is one of the most improved players in Sweden. The youngster likes to hit the ball hard and is a skilled leg spinner. He recently hit the fastest fifty in just 15 balls in the junior league and is also a member of the U19 national side.

M Nasir Iqbal considered the best all-rounder in the HUD side, He likes to hit the ball hard and is a skilled pacer. He has scored 71 runs and picked 3 wickets in last 5 games. 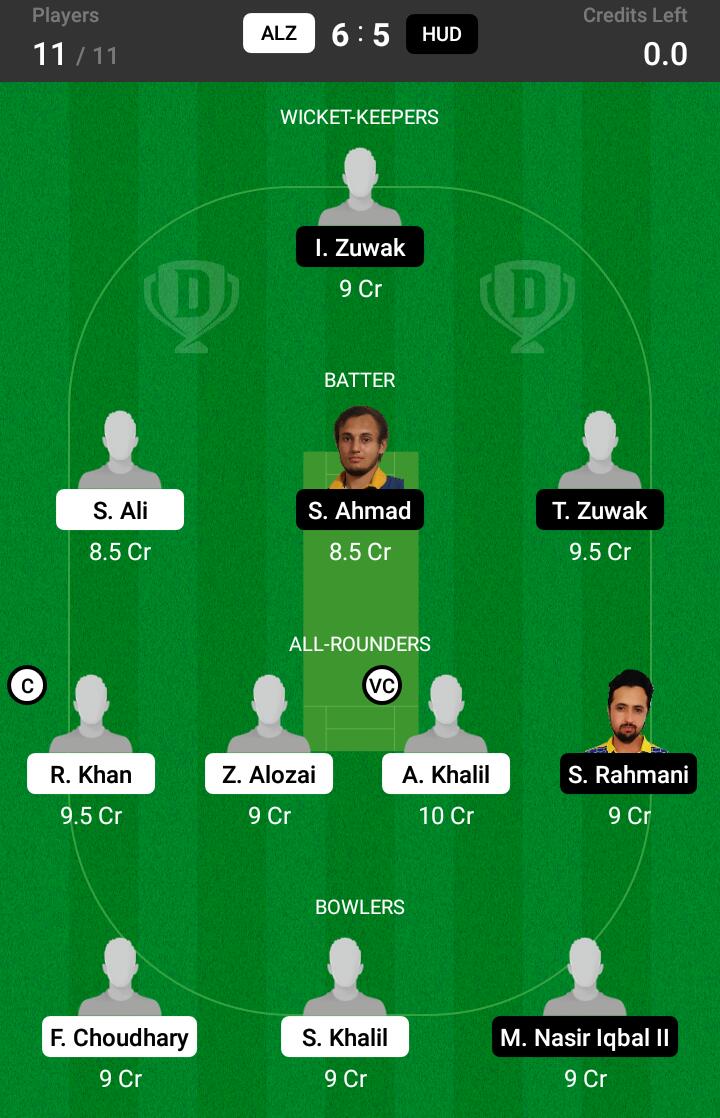