There’s a lot to take into consideration when you’re looking for the best AL vs PBCC dream11 team. Today, We are going to discuss AL vs PBCC 31st Match news, AL vs PBCC fantasy Cricket prediction, and dream11 Expert data. This League is called Dhaka T20 2021 in the dream11 app.

Abahani Limited vs Prime Bank Cricket Club, The 31st match will be played in Bangladesh Krira Shikkha Protisthan No 3 Ground, Savar on 13 June 2021 at 1:00 PM.

Abahani Limited is a very strong side And are contender of trophy. AL consist of International experienced players. They beat DOHS by 18 run 1st game, BU by 9 wickets 2nd game and GGC by 7 wicket in 3rd game.

Prime Bank Cricket Club is also good side but lack consistency. They have played 3 game won 2 while lost 1.

M Rahim is experienced wicket keeper has good record to his name. He is batting lower 2 down. He scored brilliant 84 run 1st game and 125 2nd game against SRI. Rahim has been in brilliant form. He has scored 96 run last 3 game this series.

L Das if plays will open for AL. He is not consistent with bat. Das is talented player capable of scoring big but his recent form not great. He is not fit at present.

A Haque is experienced wicket keeper has good record to his name. Haque open inning. He has represented BAN national side and has 2 hundred to his name. He has scored 24 run last 3 game this series.

M Mithun will bat 2 down and bowl he is also good vc choice. He has been performing consistantly in domestic. Mithun was with BAN side against SRI but could not get chance. He has scored 88 run last 3 game this series.

M Naim will open inning for AL. He has more than 50+ average in domestic circuit. He scored 69 runs in last 3 game.

Afif Hossain will bowl 2-3 over of spin and will also finish inning for his side.

N Hossain Shanto is termed as future of BAN but his recent form is not good.

T Iqbal will open inning for PBCC. He has been consistant performer for BAN. He also lead side, he has 99 run in his last 3 innings.

R Talukdar will open inning for PBCC. He has 40+ average in domestic and will be eager to perform here. He has scored 53 run last 3 game this series.

M Saiffudin will bat 4-5 down and bowl 4 overs . He is very handy batsman and good death bowler. He has scored 40 run and picked 2 wicket in last 3 game.

Mossadak will bat 2-3 down and bowl 2-3 over so he is also good vc choice. He is very handy with his off spin and very good hitter of bowl. He has scored 58 run 1st 3 game.

T Hasan allrounder who is capable bowler. He has scored 19 runs and picked up 4 wickets in 2 games.

A Kapali will bat 4-5 down and bowl 4 overs . He is very handy batsman and good death bowler. He has represented BAN in 2007 WorldCup and has also played in ICL.

Try A Sunny in your teams. He will be LAO bowler for side. He has experience of International games. Sunny has picked up 3 wickets in 3 games this series.

M Hasan Rana is must have from AL will bowl 2 overs in death and 2 at start can pick 1-2 wickets.

Rotate A Islam, S Islam in your teams as anybody can pick 2 wickets.

M Rahamn is must have from this department, will bowl 3-4 overs in middle and death can pick 1-2 wickets. He is very good death bowler. He has picked up 6 wickets in 3 games this series.

Try N Hasan in your teams. He will be LAO bowler for side. He has experience of International games. Hasan has picked up 5 wickets in 3 games this series.

S Islam is must have from PBCC will bowl 2 overs in death and 2 at start can pick 1-2 wickets. 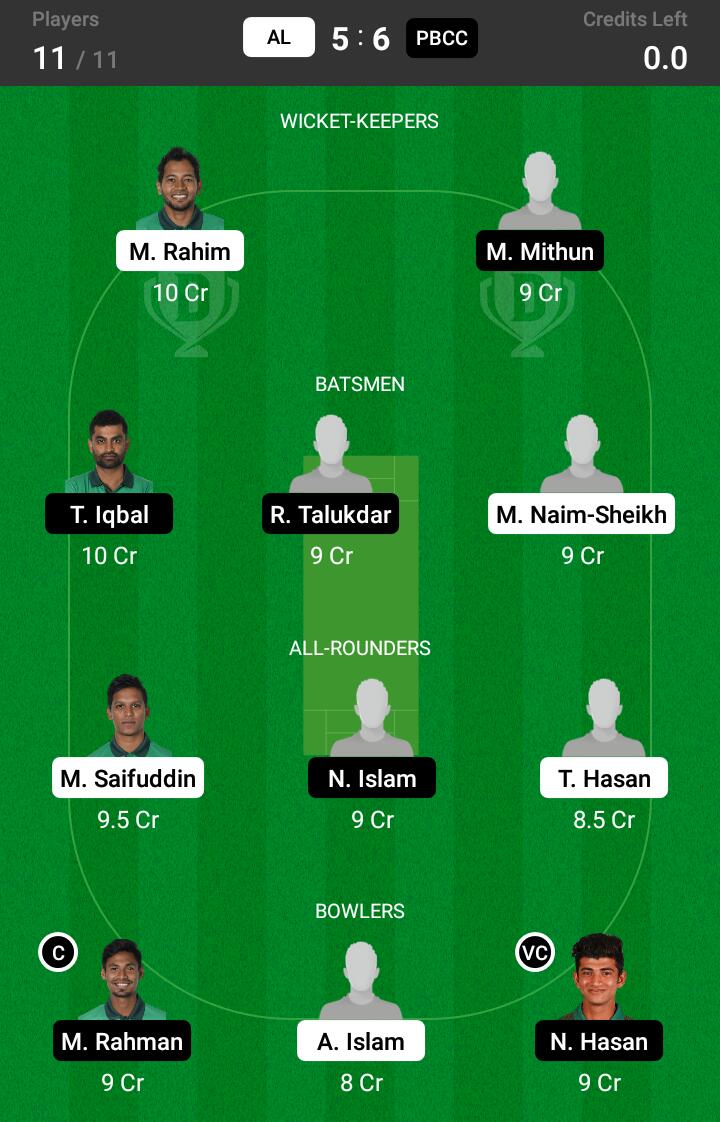