There’s a lot to take into consideration when you’re looking for the best ADL vs CTP dream11 team. Today, We are going to discuss ADL vs CTP Match news, ADL vs CTP fantasy Basketball prediction, and dream11 Expert data. This League is called Australian Basketball League 2020-21 in the dream11 app.

Adelaide 36ers vs Cairns Taipans, The match will be played in Adelaide Entertainment Centre on 4 May 2021 at 3:00 PM.

Just in terms of personnel compared to that meeting back in Round 14 in Cairns, the Taipans are now without Cam Oliver with Venky Jois having come in as his replacement for the rest of the season. Scott Machado also missed that win over Adelaide but will be back for this game while Kouat Noi and Majok Deng remain sidelined.

Then with the Sixers, Tony Crocker and Isaac Humphries are both back playing after missing that last trip to Cairns.

The Taipans might be out of the playoff hunt with a 7-19 record with 10 games of their #NBL21 season remaining, but they arrive in Adelaide a fresh unit having not played a match for nine days and have had a week to work on their new chemistry to adjust to life without Cam Oliver, and with Venky Jois.

The Snakes have still won two of their past four games, though, and without Oliver, Nate Jawai has had more of a chance to be a dominant presence inside while Tad Dufelmeier has emerged as an exciting guard prospect.

Also with the addition of Jois to Scott Machado, Jois, Jordan Ngatai, Mojave King, Mirko Djeric, Fabijan Krslovic and Jarrod Kenny they aren’t without their own threats and contributors to make life tough for a 36ers team fighting to keep their season alive.

ADL vs CTP Match Players To Watch Out (Some Unknown Players):

Daniel Johnson – It’s always a good sign for a team if it’s tough to settle on a key player. We could have gone with Josh Giddey at the point, Isaac Humphries down low, Brandon Paul who is still undefeated in Adelaide or even the emerging Keanu Pinder. But we have settled on DJ fresh off celebrating his 350th NBL game in Saturday night’s win over the Bullets. He loves playing the Taipans with a better career record against them than any other team, including a season-high 38 points last season and averaging 25 points against them this season while shooting at 48 per cent from the field. He looks to be a nightmare match up too for whoever the Taipans throw at him.

Nate Jawai – He is the one person that can be a real difference maker for the Taipans. Now without Cam Oliver available for the Snakes, he has moved into the starting line-up and is leading the scoring at 15.5 points a game while playing a season-high minute count. He is really the only big in the league who has the ability to be a completely dominant force if his team can get the ball to him in the block and let him go to work. With single coverage, he can score at will and if double teamed, he is a capable and willing passer who will then rely on his teammates hitting their shots. But if the Taipans want to win, making him the focal point of everything will be the key. 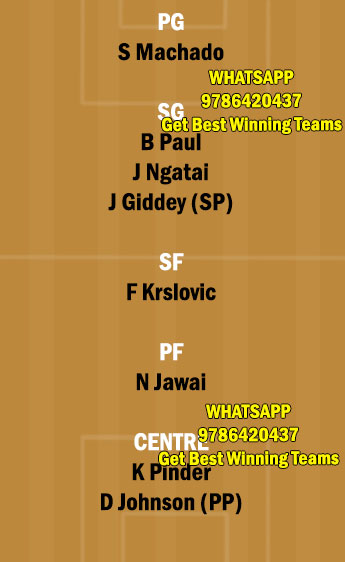