There’s a lot to take into consideration when you’re looking for the best AA vs CS dream11 team. Today, We are going to discuss AA vs CS 21st Match news, AA vs CS playing 11, AA vs CS fantasy cricket prediction, and dream11 Expert data. This called Super Smash T20 in dream11 leagues.

He hasn’t been getting many deliveries to face as he’s batting quite down the order but has given good points whenever gotten a good chance to, though that’s rare. Cleaver bats above the order comparatively but hasn’t been able to score well. Can keep either one depending on your team combination.

He is a good batsman and a safer choice amongst the two options, for your teams. He hasn’t been able to convert his starts as such but can do well.

O’Donnell is a must pick for your teams. He is a consistent batsman and bats well and is surely high on confidence. He is in good form and is a safe pick.

Robert is the skipper of the side. He has been batting well, and can get a wicket or two too if he bowls, hence is a safe pick for your teams. He bats down the order now with the inclusion of Guptill as well into the side now, so can avoid in SL and try in GL.

He failed in the previous games but is a highly experienced player and has played well over the past few years in this format of the game. Can be a safe pick. Risky players can drop in SL and try in GL.

He has played just three games here and showed his worth with the bat already. He is a safe pick for your teams and is a consistent batsman in this format of the game.

He hasn’t been playing consistently in any format but had a great outing in the previous game and is a highly experienced batsman and can be a safe pick for your teams.

He was given in the keepers section when he was used as a bowler and now when he hasn’t bowled in three games, he’s come to the all rounder section. Phillips was one of the leading run scorers in the last season and has looked good in the past few matches which he played for the Kiwis against the Windies as well as Pakistan. He is also being used as a bowler in certain games.

He has been consistently batting well and has started this season with a great knock of 75 and is a safe pick for your teams. At the same time, if you drop him in a GL team and he actually fails with the bat, it could prove amazing for you as he has been selected by more than 90% users.

He has looked in sublime form with the bat and has proved his class in every game out here. The skipper of the side in the absence of Bruce and has been leading from the front. Bruce came back in the last game but failed again so it won’t be a surprise if Worker leads in this game again with Bruce missing out.

He has been a consistent point giver in every game and has scored good runs. Clarkson can even be tried as a bowler but isn’t consistently bowling. He is batting a bit lower in the order and can be tried in GL. He is also a safe pick for SL teams due to the selection percentage but managing credits for him could be a tricky business.

He is a good all rounder and a consistent performer with both bat and ball but unfortunately hasn’t gotten too many deliveries to bat or to bowl in the previous few games. He can be a worthy GL try or can avoid from your teams too.

He has been performing consistently well with either bat or ball and can be a safe pick for your teams as well.

He is a good pick for your teams and is one of the most underrated bowlers in New Zealand. He is a safe pick for SL, but can try dropping in a GL team, or vice versa.

Lister is a hit or miss player with the ball. He picks up 50+ points or goes wicketless, so do try him in GL surely. He has gone wicketless in the last three games and can get wickets here. Must pick in GL.

The first game where he played ended up to be a 5 over contest. He is a wicket taking bowler and can be tried in GL teams. He has taken wickets in both the previous games as well. Rotate between him and Delport in various GL teams.

Jamieson has emerged brilliantly in every format and has done really well for the International side as well. He is good hitter of the ball down the order and is a consistent wicket taking bowler too. He is a safe pick for your teams.

The first game where he played ended up to be a 5 over contest. He is a wicket taking bowler and can be tried in GL teams. Rotate between him and Braak in various GL teams.

Joey has also been bowling well and has been supporting Tickner from the other end really well. He started the season well with 2 wickets each in his first three games, but thereafter has just taken 1 wicket in the next 4 games. It won’t be a surprise if Lennox comes back replacing him. If that does happen, Lennox is a punt pick.

Worthy try in GL. Hit or miss player with the ball. Mostly goes wicketless but when he does perform, he could collect more than 2.

George Worker, Glenn Phillips and Doug Bracewell are safe choices and can be kept as C/VC in SL teams. 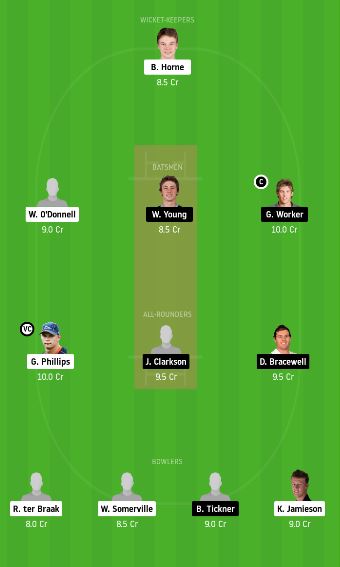 If you are like our AA vs CS dream11 prediction. Please share this article with your friends, who are playing dream11 fantasy leagues. Don’t forget to follow us onTwitter, Telegram, and Youtube for the best dream11 tips and tricks.